When it gets in range of the player while enraged, it does a swipe attack while moving towards you (making it very hard to dodge, if at all). After attacking the Dragonfly, or allowing it to attack, it slams on the ground three times, creating three successive rings of fire. This attack usually sets the player and other items on fire, causing large amounts of damage. It's recommended to defeat the Dragonfly as soon as possible, so using a Tentacle Spike or Dark Sword is recommended over a Spear. Along with this, it's recommended that the player has two sets of 100% Football Helmets and Log Suits to take some of the damage burden off, as the three hit fire ring attack can deal enough damage to instantly kill some player characters. Once you start attacking the Dragonfly in a certain rhythm (allowing at most two strikes from the player), you can cause it to only attack using the fire slam, allowing for the attacks to be dodged more easily. Due to the Dragonfly's fiery nature, it is wise to fight it while holding a very cold Thermal Stone to avoid overheating.

One of the easiest ways to deal with any boss in Don't Starve is a Sleep Dart/Pan Flute and Old Bell/14 Gunpowder combination. Not only does the 14 Gunpowder instantly bring the Dragonfly down, but since it is immune to fire damage, it will not destroy its loot.

Another effective way to deal with the Dragonfly is by “feeding” it 20 Ashes(Actually just put the pile of Ashes onto the ground, one cannot directly give the Ashes to the Dragonfly). Afterwhich it will start flying toward the pile and then inhale those ashes. Before long it will stumble into deepsleep, one can then use 14 Gunpowder listed above to finish it off.

28 Blow Darts can make short work of the Dragonfly. Using either a Blow Dart attack or Ice Staff will coax it into stomping giving you time to get away after swinging at it with melee weapons.

The Old Bell can be used twice to weaken it, leaving it with 750 health points. Placing three or four piles of ash on the ground and ringing the Old Bell as the Dragonfly comes for them is a very effective way to get it to stay put as Bigfoot approaches.

Treeguards or any type of monster with large amounts of health seem to be able to fight the Dragonfly and deal noticeable damage.

Refrain from luring it to areas with Beefalo or Pigs, as tempting as it may be, as it will simply kill them all in 1-2 attacks.

If you start in Spring or even Summer and don´t have the resources for the aforementioned strategies, try to bring it to a swamp by either going to a swamp when you hear its growl or by luring it there. Use the hostile tentacles and/or the Merm there. Ideally, you want to put down some ash close to tentacles, this will make it come there. Every time it kills any hostile monster, it will be reset to a calm state. Rinse and repeat the process until it simply drops dead.

Below is the number of hits it takes with each weapon to kill the Dragonfly when playing with characters with a default damage modifier. The Weather Pain is not included due to the random nature of its projectile.

An angered Dragonfly stomping the ground. 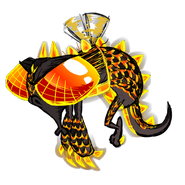 An enraged Dragonfly glowing at night.

The face of the Dragonfly seen in the teaser trailer.

The Dragonfly in the Reign of Giants teaser.