As with Slurtles, they eat minerals except Marble and can be forced out of a Slurtle Mound by hitting the mound. When ignited, a Slurtle or a Snurtle will explode in a few seconds, dealing 300 damage in a small radius. Killing it this way will make it a useful bomb; however, it will not drop any items.

Snurtles are rarer than Slurtles but have a large chance to drop Snurtle Shell Armour. Due to their hiding ability and moderately large health, they take some time to kill. For this reason, it is a good idea to fight them when no other creatures (which might join the battle) are nearby.

Like Cave Spiders, one of the easiest ways to kill Snurtles is to simply attack them each time they poke their head out of their shell until their health is worn down. Doing such is also more efficient than any other method - the player will do far less damage whilst they are in the shell, making it more taxing on one's weapons to get a kill. Slurtles will retreat into their shell when the player throws a Boomerang, mitigating most damage, yet still consuming the 10% per throw durability on the Boomerang. 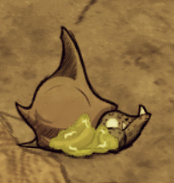