蛞蝓龜(Slurtle）是一種由洞穴中的甲殼石墩產生的中立生物。They are small and slow, but they have high health and can retreat into their shells after a number of hits, which absorbs 95% of damage, so they are very difficult to kill. When killed, they drop two Slurtle Slime and Broken Shell or Shelmet. Every once in a while they will drop slime while still alive, similar to how Beefalo drop Manure.

They will consume any mineral item, except Marble, when left on the ground. When there aren't any of those rocks around, and the character's inventory has them, the Slurtle will attack the character. A successful hit will knock a rock out of the character's inventory onto the ground (Similar to how Frogs attack), which the Slurtle will then attempt to eat. It will also knock rocks out of a backpack left on the ground or from a nearby chest. Upon eating a rock-type item, there is a chance that it will drop slime. If the player hits a Slurtle while it is chewing its food, the mineral will be dropped back onto the ground.

A Snurtle is an alternate version of a Slurtle with a different kind of shell, which absorbs 80% of damage. It actively flees from the player and will retreat into its shell instead of attacking back. Upon death, Snurtles drop two Slurtle Slime and sometimes a Snurtle Shell Armour or a Broken Shell. They spawn rarely from Slurtle Mounds.

As with Slurtles, they eat minerals except Marble and can be forced out of a Slurtle Mound by hitting the mound. When ignited, a Slurtle or a Snurtle will explode in a few seconds, dealing 300 damage in a small radius. Killing it this way will make it a useful bomb; however, it will not drop any items.

Snurtles are rarer than Slurtles but have a large chance to drop Snurtle Shell Armour. Due to their hiding ability and moderately large health, they take some time to kill. For this reason, it is a good idea to fight them when no other creatures (which might join the battle) are nearby.

Like Cave Spiders, one of the easiest ways to kill Snurtles is to simply attack them each time they poke their head out of their shell until their health is worn down. Doing such is also more efficient than any other method - the player will do far less damage whilst they are in the shell, making it more taxing on one's weapons to get a kill. Slurtles will retreat into their shell when the player throws a Boomerang, mitigating most damage, yet still consuming the 10% per throw durability on the Boomerang. 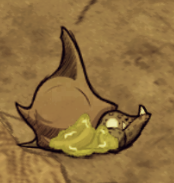