"wall_ruins"
「What will protect me from what's inside?」

Walls are craftable Items and deployable Structures that prevent the player's and Mobs' movement.墙是一种可以被建造的物体，他可以被攻击所破坏。它会阻碍玩家和怪物的行动 Hay, Wood, Stone, and Thulecite walls have 100, 200, 400, and 800 maximum health, respectively. Contrary to popular belief, walls seem to not be able to restrict movement when placed next to water.

乾草堆是這四個類別中最弱的，可以合成以及分拆的物品。The Hay Wall is the weakest of the four Walls, a craftable Item and a deployable Structure that prevents the player's and Mobs' movement. Once built, it can be repaired or upgraded into a second tier with another piece of Hay Wall or enough Cut Grass. It can be attacked and destroyed, leaving a destroyed Hay Wall. Hammering the wall will yield two Cut Grass from second tier and one Cut Grass from other tiers. It has a maximum of 100 health and 50 health when first built before upgrades. The Hay Wall is highly flammable and one should exercise caution when fighting Red Hounds near it. If burned they will drop one Ash.

The Wood Wall is one of four Walls, a craftable Item and Structure that prevents the player's and Mobs' movement. Once built, it can be repaired or upgraded into a second tier with another piece of Wood Wall or enough Twigs, Logs, or Boards. It can be attacked and destroyed, leaving a destroyed Wood Wall. It is also highly flammable, so measures should be taken when fighting Red Hounds. Using a Hammer on the wall will yield one Log from tier one and two and two Logs from tier three. It has a maximum of 200 health, and begins with 100 health when first built before being upgraded.

The Stone Wall is the second toughest of the four walls, behind the Thulecite Wall. It is crafted as an Item and deployed as a Structure that prevents movement by both creatures and characters. A Stone Wall is first built in its second tier, but can be repaired (upgraded) into a third or fourth tier by adding another piece of Stone Wall or enough Rocks or Cut Stone. It can be attacked to reduce it to first tier and then destroyed, leaving a destroyed Stone Wall. Hammering the wall will yield two Rocks from fourth tier and one Rock from other tiers. It has 200 health when first built and a maximum of 400 health. In repairs, one rock will add considerably less health to the wall than one stone wall will.  Since it ultimately takes six rocks to make six stone walls, using rocks directly to repair a wall is very inefficient.  Likewise using cut stone is a loss versus using another piece of stone wall.  In addition, the cost to fully repair a completely destroyed wall is much higher than just breaking the wall down with a hammer, and starting fresh.  Once they are broken down completely it can take eight or nine pieces of wall to completely build back up to a top level wall, due to the way the repair function works.

The Thulecite Wall is the toughest of the walls, having 400 health when initially placed and a maximum health of 800 when fully upgraded. It can be crafted using an Ancient Pseudoscience Station at the cost of one Thulecite. When broken down with a Hammer, it will yield Thulecite Fragments.A Thulecite Wall can be placed down to block the path of both creatures and the player. When built and placed, it will be at its third tier of repair. It can be upgraded into two more tiers with Thulecite Fragments or Thulecite. When hammered, the fifth tier will yield two Thulecite fragments, while the other tiers will only give one. This means that if the player doesn't repair a third tier wall and it gets damaged, it's better to hammer it down and replace it rather than repair it. Thulecite Walls are also found naturally in the Ruins, sometimes around Ancient Guardians and Damaged Clockworks.

The 5 tiers of a Stone Wall.

Various states of repair of the Thulecite Wall.

Thulecite Walls as they were before the Stuff of Nightmares update. 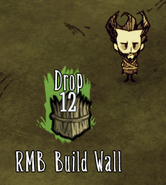 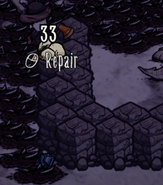 Prompt that appears when a Wall can be repaired, in this case a Stone Wall with Rocks.

All types of walls built next to each-other. From order of outside to inside, Stone wall, Thulecite Wall, Wood Wall, Hay Wall.
在此图库中添加照片
来自“https://dontstarve.fandom.com/zh/wiki/%E7%89%86?oldid=7539”
除了特别提示，社区内容遵循CC-BY-SA 授权许可。