Both puddles and tides can be stopped by placing Sandbags in front of them, but if a puddle isn't completely surrounded it can continue to expand in any direction which isn't blocked by a sandbag. This means that given enough time or a small enough wall, a puddle can seep around a wall of sandbags and overtake it. However, a complete encirclement of sandbags can keep a puddle from getting in or out, allowing you to either contain a puddle in one spot where it starts or keep a small area from being touched. Puddles can also be stopped from expanding by placing a single sandbag in the exact center, even though this single sandbag does not block any edges of the puddle. It is not known at this time whether this is a bug or intended functionality. This works for any size of the puddle, as long as the center "eye" is covered with a Sandbag.

A valid method to use Sandbags to stop a puddle from expanding. 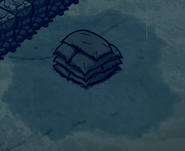 Alternative method using a single Sandbag, applied in the earliest stage.
SangbagUsage3.png
Alternative method applied at a later stage to the puddle on the left. Puddle on the right is not stopped in any way.
Saved crockpot.jpg
Puddle expansion towards the Crock Pot is stopped by proper use of Sandbags.
Stage 2.jpg
However, expansion will continue in other directions, and can get around the Sandbags if given enough time.
Ds5.jpg
A base protected from flooding by sandbags
在此图库中添加照片
来自“https://dontstarve.fandom.com/zh/wiki/%E6%B2%99%E8%A2%8B?oldid=15084”
除了特别提示，社区内容遵循CC-BY-SA 授权许可。