"This is a page for a structure that's in the game. For the unimplemented object, see Sunk Boat.

"sunken_boat"
「Another Voyage comes to an end.」

The Sunken Boat is a structure that is generated next to the ocean, and Flotsam can be found in the nearby water. A parrot named Wolly sits atop the boat, and the Flotsam can be snagged with a Fishing Rod to collect various resources and trinkets.

A Sunken Boat takes four hits of a Hammer to be destroyed, and will drop three Gold Nuggets, three Boards, a Blue Gem and a Red Gem. Wolly will fly away from the boat if it is struck with a Hammer.

Wolly will accept a Trinket or any raw/cooked meat as a gift, and give a Crimson Feather as well as a random number of either Flint, Gold Nuggets, or Dark Petals. Wolly will not accept raw or cooked Monster Meat, but will accept Monster Jerky. When given an Old Boot, Sea Worther, Sextant, Soaked Candle or Toy Boat, Wolly will tell a piece from of one of Wolly's Riddles in addition to dropping loot. After trading, Wolly will fly away from the Sunken Boat and return after one game day. 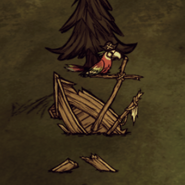 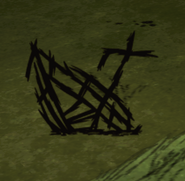