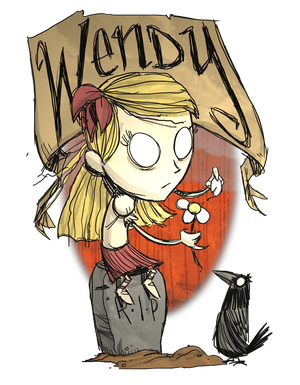 「Abigail? Come back! I'm not done playing with you.」

This is a guide for playing as Wendy, the Bereaved. It will give a general summary of her strengths and weaknesses, and will also explain some of the most common and effective ways to utilize her twin sister, Abigail.

Preferring to employ elaborate tactics and strategy in combat, Wendy is a unique character whose gameplay often involves fighting large-scale battles into the darkest hours of the night.

One of her more easily overlooked strengths is a lower and slower sanity drain debuff from monsters and the slow drain of dusk and night. Night time can wear her sanity down eventually, but it will take much longer than with other characters. This gives Wendy much more freedom and choice to do as she pleases when the night comes.

The first hurdle one will have to face as Wendy is that she simply doesn't have the strength to one-shot the same enemies that some other character could. Her physical strength is equal to Wes', leaving her more vulnerable to some threats that might have been overlooked with other characters, such as Wilson or Willow. Kiting is almost a necessity as Wendy, and it becomes increasingly important to get a feel for the timing of your enemies' attacks, as well as to avoid getting overwhelmed - something that is easier to fall victim to without Abigail around to help.

Abigail is Wendy's deceased sister, called back into ghost form through her Flower. Summoning Abigail lets you trade a hefty 50 sanity for all of the destructive powers of an angry spirit but always remember that Abigail is NOT invincible and that she can die. Once summoned, Abigail will follow Wendy around but at a distance so she is not completely "next" to Wendy until either Abigail dies, or until Wendy attacks her. Abigail will harmlessly float near Wendy most of the time, but she will attempt to attack any enemy that Wendy attacks, or any enemy that attacks either Wendy or Abigail herself. Abigail turns red from anger when she is causing damage or fighting the enemy.When Abigail attacks, she utilizes a short-range area-of-effect (AoE) attack that will deal damage to any enemy in a small radius around her. This damage starts off weak in the daylight, while gradually becoming stronger as night falls; eventually ramping up to four times as much damage during night as she does during day!

Learning how best to use Abigail's strengths, and how to manage her weaknesses, is what will set the stronger Wendy players apart from the rest. Abigail isn't perfect, but she can easily carry you through some of the most common threats in the game, letting you rest easy where you could have struggled alone.

As she is more vulnerable by herself, one of the most valuable assets Wendy possesses is the ability to throw her sister at creatures in order to kill them for her. Often you can let her take the brunt of enemy attacks for you, while you rush in after the aggro has been triggered to get your own attacks in (or just to collect the loot). Abigail regenerates health gradually over time in the same way that Chester does and can take quite the beating compared to Wendy, though it isn't hard for Abigail to be bested by certain kinds of enemies.

Abigail will start to attack things when you click to attack them, making a viable strategy to attack-click, quickly move to break the path finding, and then let whatever you just clicked at feel the burn of her ectoplasm.

Unlike the player (usually), Abigail can be brought back several times in the same world. Don't be afraid to throw her to the Hounds or to use her as a scapegoat in dire situations; your life is far more important than hers.

Some of the situations in which Abigail shines are listed as follows:

Enemies to face with Abigail:

There are also many enemies that Abigail will struggle to fight against. These foes are often plentiful on the map and can be extremely dangerous to any Wendy player. Care must be taken when attempting to pass through the areas where these mobs reside when Abigail is in tow.

Enemies to avoid with Abigail:

Other notes about Abigail:

Abigail is summoned using her Flower. When the flower is fully open, killing anything (even yourself!) while the flower is on the ground will summon her, causing you to suffer a -50 Sanity penalty as a result. However, this does not apply to murdering a captured animal within your inventory (in DST, this method works).

Abigail's Flower goes through three distinct stages; the first will show it curled up with a white hue, the second will show it starting to open with a faded pink color, and the third will show it fully open and glowing a red-pink, as well as it levitating when left on the ground.

Be warned: -50 sanity is a high price to pay for summoning Abigail. While usually worth it, unprepared players can find such a sanity drop hard to recover from. Try to have some sanity-restoring food or clothing at the ready in order to replace the cost. It is also recommended that the player should not try to summon Abigail when their sanity is already low to begin with.

The easiest way to ensure that you can summon Abigail is to have a nearby Flower and wait for a Butterfly to spawn. Even Wendy, with her tiny fists, can kill these flying carbs in one hit. During Winter, stored Rabbits or Birds can be used instead; though they must first be placed upon the ground before sacrificing them in order to summon her.

Above everything else, it's important to know your own limitations and to keep a watchful eye on your items' durability and your health. Abigail will help, but don't let her presence make you feel indestructible. Be prepared and have a plan for any engagement; Abigail can fail you, and you are much weaker by yourself, particularly if you get blindsided or something breaks unexpectedly. Be conscious in combat with Wendy: surprises and being careless are your worst enemies.

As long as things stay on your terms and you exercise caution, Wendy will carry you well into day 100 and beyond.