Year of the Gobbler

Year of the Gobbler

During this event, the Clucky Winter Hat Skin was given upon opening the game. Also, the chance for Gobblers to spawn from Berry Bushes is three times higher than usual.

Players can revisit this event by setting Events to Year of the Gobbler in the world creation menu. Event-only themed skins will be disabled when revisiting the event.

"Make offerings to the majestic Gobbler."

A Berry Bush can be offered to gain access to the Offerings Tab.

“It hungers for a sacrifice.”

“The native Meleagris flock to it.”

“I'm not giving anything to those birds!”

“It seems my fortune's changing.”

“We wanna give it something!”

“I should show some appreciation. I've eaten a lot of turkey legs.”

“Huh? What you want, gobble-bird?”

“This will be a giant time sink if I'm not careful...”

The Gobbler Shrine is a craftable Structure located in the Structures Tab, and requires 8 Gold Nuggets and 2 Boards to craft. It is always available to craft and does not require prototyping. Offering any type of Berry Bush or a Juicy Berry Bush to the Gobbler Shrine will grant players access to the Offerings Tab where they are able to acquire event-specific items using Lucky Gold Nuggets.

Gobbler Shrines attract nearby Gobblers to them and renders them passive to the player, meaning that they won't run away when approached. Gobblers will also not eat berries off of bushes while near a Gobbler Shrine. Gobblers, however, will still eat Berries lying on the ground.

If the Gobbler Shrine is destroyed by Hammering it, it will drop any Berry Bush planted in it, along with its resources. Gobbler Shrines are also flammable.

“What a lucky find!”

“I don't think I'm supposed to spend this.”

“Luck has long since abandoned me...”

“Such a curious shape.”

“I could use a bit of prosperity.”

“There's something jangling around inside.”

Lucky Gold Nugget are used to acquire items from the Offerings Tab and can be obtained from Red Pouches dropped by Gobblers. Gobblers drop one Red Pouch each after eating Berries off the ground, and they can only drop a Red Pouch once every full in-game day.

Items can be obtained from the Offerings Tab when standing next to an activated Gobbler Shrine, each of them having a different function. Similar to the Ancient Tab and the Ancient Pseudoscience Station, these items cannot be prototyped and then made on the go in the future; in order to craft an item under this tab, the player must always be near a Gobbler Shrine.

The following items can be crafted only at the Gobbler Shrine Tab:

“Now I'll have no problem keeping my cool.”

“It's a big fan made of tailfeathers.”

“A gust of luck from feathers plucked!”

“I don't think it was very lucky for the poor bird.”

The Lucky Fan can be acquired in exchange for 3 Lucky Gold Nuggets at the Gobbler Shrine.

When used the first three times, it loses 22.2% durability per use. It summons a whirlwind that destroys nearby Structures, causing damage to nearby Mobs and also to the player. This is similar to but not the same as the function of the Weather Pain. The fan also cools players down and puts out nearby Fires similar to the Luxury Fan.

When used the last three times, it loses 11.1% durability per use and does not create whirlwinds anymore. 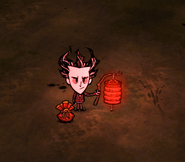 Webber about to give a Juicy Berry Bush to a Gobbler Shrine. 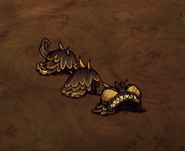 A complete Lucky Beast Costume lying on the ground. 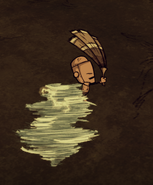 Different types of bushes offered to the Gobbler Shrine.

A drawing of some of the event's features from Rhymes with Play.
Tiếng Việt
Community content is available under CC-BY-SA unless otherwise noted.
Advertisement