No (Yes when playing as

“I would very much like to talk to whoever buried that treasure.”

“A chest of adventure buried under the ground!”

When worn, Woodlegs' Lucky Hat creates a new X Marks the Spot every 800 seconds (slightly more than 1 Day and a half). If worn by an NPC, such as a Wildbore or a Prime Ape, it only has a 66% chance to spawn a treasure.

Chance Loot: Each item in this loot table has its own independent chance of appearing, meaning they can appear in any combination or not at all. 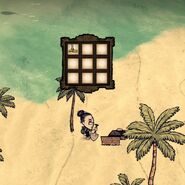