A gruff, bearded woodsman, Woodie has a soft spot for nature, plaid, and his trusty axe, Lucy.

Quotes
Clothes
“Lucy would want me to chop it down.”

Woodie is notorious for having very little known about his character. His biography in DST's Compendium reveals a bit about himself:

Hailing from the pine-covered mountains of the great white north, Woodie is an unassuming yet strangely mysterious man who keeps his past close to the vest (or in his case, the flannel). He is never seen without his signature bushy beard or trusty axe Lucy, who herself is a bit of an enigma. The other Survivors are not quite sure whether Woodie is simply mad, or if there might be something else to the seemingly inanimate object. Sometimes they swear they can hear a jovial female voice speaking to Woodie when no one else is around...

In the animated short Tree's A Crowd, his DST exclusive forms Weremoose and Weregoose are given the spotlight. The short is officially summarized in the Compendium:

As the power of the moon has grown, so too have the effects of Woodie's curse. Woodie soon found that his form would shift into not only the Werebeaver, but a Weremoose and Weregoose as well. As his changing forms became more unpredictable, Woodie resolved to find a way to have more control over his curse. Using every bit of knowledge he'd gained from his time in the Constant (and some additional tips from Ms. Wickerbottom) he soon discovered that his transformations could in fact be controlled. By fashioning representations of each of the three beasts and consuming them only when he wanted to invoke that form, Woodie now feels more comfortable in his own skin than he has in quite a while.

Woodie starts off with an Axe named Lucy. Lucy is sapient and talks to Woodie, egging him on while chopping down Trees, and warning him about the curse. Lucy talks in red text to differentiate from Woodie's white text. Lucy has infinite durability and reduces the amount of chops required to chop a tree but deals less damage compared to a normal Axe.

If Woodie hits a Tree with an Axe too many times in a short space of time or if it is a full Moon, he will transform into a Werebeaver. In this Werebeaver form, the Hoedown Soundtrack will begin to play, the Map and inventory will be unavailable, and the 3 main stats will disappear and be replaced by the Beaverness Meter. His Beaverness will decrease over time, and when he takes damage, and increase when eating wood-like items, such as Logs or Saplings.

When the Beaverness reaches 0, Woodie will appear in the same spot, at the beginning of the next Day, with 50 Health, 37.5 Hunger and 50 Sanity. Any Mobs aggressive against the Werebeaver will remain in place and also be aggressive towards Woodie, possibly killing him because of the low Health.

In the Shipwrecked DLC, the Werebeaver cannot swim. Turning into a Werebeaver while Woodie is on a Boat will result in the Werebeaver sinking. Woodie will then respawn the next day on the closest island with enough materials to build a Log Raft. This also means that the Werebeaver's movement is limited to only the island upon which Woodie transformed.

On the other hand, the Werebeaver is completely immune to Poison.

In the Hamlet DLC, the Werebeaver is immune to Hay Fever and Fog.

In Don't Starve Together (DST), Woodie tranforms into a random form, Werebeaver, Weremoose or Weregoose, if he eats two Monster Foods in under 4 minutes or during full Moon. If Woodie eats one of the Kitschy Idols he will transform into the corresponding form.

In all his Wereforms, the Hoedown Soundtrack will begin to play, inventory will be unavailable, and the Hunger meter will disappear and be replaced by the Wereness Meter. The Map is still available. When the Wereness reaches 0, Woodie will turn back into a human with 0

Woodie's beard grants him 45 points of insulation against the cold. He also has 50% more chance to spawn Treeguard and Poison Birchnut Tree whatever the season.

When his Wereness Meter reaches 0, the Hunger meter is set at 0.

Woodie's quotes can be found here. 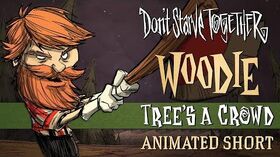