"Shine a light both day and night."

A ranged light source that follows the player around.

“What an ingenious idea!”

“So no more night fires then?”

“But what if I liked the dark?”

“THE OVERALLS FLESHLING HAS PROVED USEFUL”

“Fine, as long as it don't start no forest fires.”

“Well sure, if you want to take the easy way out.”

“She made us a nightlight!”

“Oh good. I don't much like the dark out here.”

“What a funny thing!”

“You never know what's out there, lurking in the dark.”

“That young lady is a genius!”

Winona's Spotlight is a character-exclusive Structure craftable only by Winona in Don't Starve Together. It is found in the Engineering Tab and requires one Trusty Tape, two Gold Nuggets, and 1 Firefly to craft. It requires being near a Winona's Generator or a Winona's G.E.M.erator to work.

When in a certain radius (shown by a circle around it when placing it), the Spotlight will follow the player closest to it with a light source. If there are multiple Spotlights however, they will prioritize having different targets from each other. 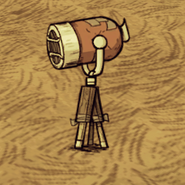 A Spotlight that is not powered by a Generator. 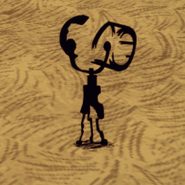 Winona's Spotlight featured in a promotional animation for her Character Update.

Winona's Spotlight as seen in a drawing from Art Stream # 59.

Earlier concepts for Winona's Spotlight from Rhymes With Play #228.

Concept art for Winona's Spotlight from Rhymes With Play #228.

Concept art for Winona's Spotlight and Catapult from Rhymes With Play #228.
Tiếng Việt
Community content is available under CC-BY-SA unless otherwise noted.
Advertisement