“Looks science-y. How does it work?”

“Thingamabob made by fixing lady.”

“It's a kind of electrical box.”

“An electrical power supply for her lovely inventions.”

“Where does she find the time to build all this.”

“The tinkerer hath many tricks.”

“That oughta do it.”

“This box have weird colored branches sticking out.”

“A generator! Do you think she could make a radio too...?”

“So this is one of those modern electrical thingies?”

Winona's Generator is a character-exclusive Structure craftable only by Winona in Don't Starve Together. It is found in the Engineering Tab and requires one Trusty Tape, two Logs, and two Nitre to craft. It is used to power nearby Winona's Catapult and Winona's Spotlight.

A Winona's Generator can be refueled with Nitre for 50% full charge per Nitre. 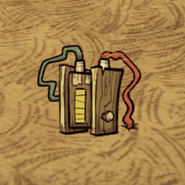 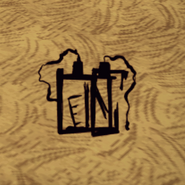 Earlier concepts for Winona's Generator from Rhymes With Play #228.

Concept art for Winona's Generator from Rhymes With Play #228.
Community content is available under CC-BY-SA unless otherwise noted.
Advertisement