“She's made a sort of automatic defense system.”

“It visits death upon intruders.”

“MY MINION CONTRIBUTES FORCES TO THE ROBOT WAR”

“That Winona is quite resourceful.”

“I could have thought of that.”

“Not a bad result considering the materials.”

“It's sure to entertain our guests!”

“To defend our camp!”

“She's put a modern spin on a medieval concept.”

Winona's Catapult is a character-exclusive Structure craftable only by Winona in Don't Starve Together. It is found in the Engineering Tab and requires one Trusty Tape, three Twigs, and 15 Rocks to craft.

In order to work, it has to be near a Generator or a G.E.M.erator.

The Winona's Catapult will act much like a Houndius Shootius. It will automatically attack Mobs targeting the Character or any Mob that the player attempts to attack, except for Shadow Creatures. Winona's Catapult can be attacked by Mobs and has 400 HP. It deals 42.5 AoE damage with a single shot. The Catapult also repairs itself by 8.3 hp every 10 seconds. 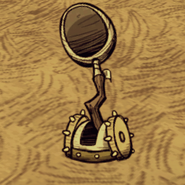 A Catapult that is not powered. 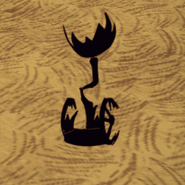 Winona's Catapult as seen in a drawing from Art Stream # 59. 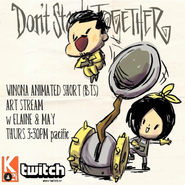 Concept art for Winona's Spotlight and Catapult from Rhymes With Play #228.
Tiếng Việt
Community content is available under CC-BY-SA unless otherwise noted.
Advertisement