"I will conquer it all with the power of my MIND!"

"I will conquer this world with the power of my MIND!"

At heart Wilson is truly a man of science. It's not in his nature to resist the call of the unknown.

“Say pal, looks like you're having some trouble! I have secret knowledge I can share with you, if you think you are ready for it.”

–The radio's offer to Wilson in Forbidden Knowledge

Wilson was the first of the playable characters to receive a backstory through an animated short, called Forbidden Knowledge. The events of this short were later officially summarized in DST's Compendium:

While toiling away in his home laboratory late one night, Wilson was startled to hear a voice on the radio speaking directly to him. At first he feared he'd gone mad from too many late nights of experiments and accidentally-inhaled chemical fumes, but the voice assured him that it was no mere figment of the imagination. In fact, the voice had a proposition for him: if Wilson would build a machine according to their specifications, then he would be rewarded with secret knowledge, the likes of which no one had ever seen. Casting aside his better judgement [sic] (after all, what harm could come from making a vague bargain with a mysterious disembodied voice?) Wilson threw himself into constructing the machine. When at long last it was finally completed, the gentleman scientist had a moment of hesitation... a moment that might have saved him from his impending fate, had he been just a bit stronger of will. But at the voice's insistence, Wilson flipped the switch and activated his creation... and was never seen again. Well, at least not in this world.

Wilson's special power is that he can grow a hairy Beard. It has two basic characteristics:

Below is the days it takes Wilson to grow his Beard to the next stage, along with the number of Beard Hair gained and Insulation provided with each stage.

If Wilson dies and resurrects, the Beard growth resets but otherwise carries its length between worlds or Caves and Ruins.

Being the default character his Health, Hunger, and Sanity all have default values and he has no drawbacks. Overall, Wilson is meant for better Winter survival and efficiency, as well as easier access to Meat Effigies.

In the Reign of Giants (RoG) and Shipwrecked (SW) DLCs, having a Beard during Summer or Dry Season respectively will make Wilson Overheat faster. Some of his examination quotes are different to reflect the changes in the DLCs.

Wilson's quotes can be found here. 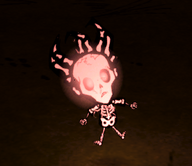 Wilson after being struck by Lightning in the Reign of Giants DLC, showing he has bones in his hair. 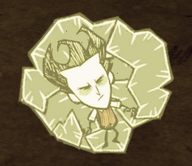 A frozen Wilson in DLCs.

Wilson put to sleep by a Cooked Mandrake.

Wilson's ghost in Don't Starve Together.

Wilson's skull as seen in the game files.

Wilson in the very early alpha of Don't Starve.