“It's her lucky lighter.”

“It's my lucky lighter!”

“Ah, a mechanical tool for fire starting. How useful.”

“Keep it away from the trees!”

“It lights the fires öf mine heart!”

Willow's Lighter is a portable light source exclusive to Willow. It can be equipped in the 'Hand' slot and is able to set flammable objects on Fire. Used as a weapon, Willow's Lighter deals 17 damage per hit and has infinite uses.

Willow's Lighter has a very small radius of light (less than a Torch), though it can still prevent attacks from Charlie. Willow will receive a small Sanity boost from the fire it provides (+0.6/min). It also provides a small amount of Warmth (to slow Freezing).

In the Reign of Giants DLC, Willow's Lighter does not provide warmth. Striking a Mob with the Lighter may set it on fire.

In Don't Starve Together, the Lighter loses durability while equipped, and lasts 10 minutes. It can be crafted, but only by Willow. It requires 1 Rope, 1 Gold Nugget and 3 Petals to craft, and is available from the start. Willow can cook Food with the Lighter by selecting a Food Item and right clicking above the lighter in the inventory. In Rain, the Lighter may burn up to 100% faster (depending on precipitation rate), unless the player is sheltered. 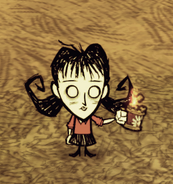 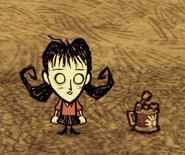 Willow's lighter on the ground.

If any character but Willow is given her lighter via Console. 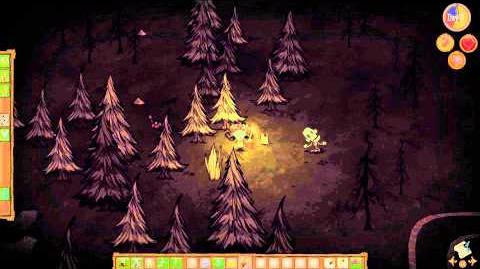 Willow's lighter has a very small light radius, barely keeping Chester inside it even though he's right next to her.

Cameo of Willow's Lighter in From the Ashes (on the second shelf from the top).

Willow's Lighter as seen in a drawing from Art Stream # 43.

Willow's Lighter as seen in the Year of the Gobbler update poster.

Willow's Lighter from Rhymes with Play.

Willow's Lighter as seen in the poster for the Strange New Powers update.

Willow's Lighter in a promotional poster for the release of Don't Starve Together.

Retrieved from "https://dontstarve.fandom.com/wiki/Willow%27s_Lighter?oldid=453081"
Community content is available under CC-BY-SA unless otherwise noted.