“Puny house could not hold me.”

“Hopefully they won't invite me in.”

“HOW WILD CAN THEY BE IF THEY LIVE IN A HOUSE?”

“A shelter for the bore.”

“Is this what passes for architecture around here?”

“Rudimentary, but quite sound structurally.”

“Muffled oinking is coming from inside.”

“How wild can they be if they live in houses?”

“Bet them bores be knowin' how ta parrrrrty.”

“'TIS THE HOUSE OF WILDBORE”

“I'd rather live on my balloon.”

Wildbore Houses replace Pig Houses in the Shipwrecked DLC. They are occasionally encountered in the Beach biome. Each house contains a single Wildbore, which will roam around the house during day time. A new Wildbore will spawn from the house in 4 days, if the previous occupant is killed. Similar to Pig Houses, Wildbore Houses emit light at night if they are occupied, but it will go out if the player gets too close to the house. The houses can be crafted using 8 Bamboos, 5 Palm Leaves, and 4 Pig Skins, and requires the Alchemy Engine to prototype.

If a Shipwrecked-compatible world is created, there is a small chance of having several Wildbore Houses spawn within a Pig Village, making them accessible in worlds that have not been connected to a Shipwrecked world. 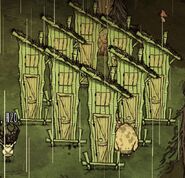 A group of Wildbore Houses in a Reign of Giants world.
Community content is available under CC-BY-SA unless otherwise noted.
Advertisement