Cannot be spawned
“TIS THE CURSE O' THE HAIRY PIG!”

The Werewilba is the cursed form of Wilba. In this Werepig form, the special music will begin to play.

Wilba is able to turn into a Werepig during a Full Moon, Aporkalypse, or after eating two Monster Food items within half a day.

Wilba reverts back to her normal pig form after the Full Moon or Aporkalypse ends. If the transformation was induced by eating monster food, she will turn back after 1 Day. Each monster food eaten will extend the duration of the transformation by half a Day. Note that Gummy Slugs and Bean Bugs count as monster food and will turn Wilba into a Werepig. Eating Jellyfish (raw or cooked) won't turn Wilba into a Werepig. Upon returning to her normal form, Wilba will drop 2 Beard Hairs.

The Werewilba is able to chop, dig, mine, hammer and hack objects, and fight Mobs, but otherwise can't interact with objects in any other way. She has limited night vision and as such is immune to the Night Monster. She can also heal herself by 0.5

per second as long as she is not starving.

Upon becoming a Werepig, her hand, body and head slots all become furs, which make her unable to equip items. She cannot ride Beefalo or Boats, either. As a Werepig, which is easy to starve, her Hunger drains 5 times as fast as in her normal form. Although Werepigs are not considered as a Monster, she is, causing Pigs and other friendly mobs to attack her on sight. Additionally, she cannot use structures like Campfires, Crock Pots, or Chests, hammering them instead. She cannot choose action when multiple apply, and prioritizes destructive actions. For example, grown Bamboo can only be dug, not hacked, and Walls can only be hammered after being attacked and damaged to 0 health. Dying as werepig counts as proper player death, ending the game or consuming a resurrection item. The player always resurrects into Wilba's normal form. 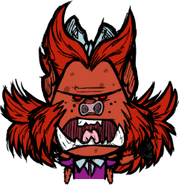 Wilba's Werepig form from a promotional image for the Character Update.

Wilba as a Werepig in the Hamlet Release trailer.

Retrieved from "https://dontstarve.fandom.com/wiki/Wilba/Cursed?oldid=462353"
Community content is available under CC-BY-SA unless otherwise noted.