“There is the hate of life burning in its eyes!”

“A white whale! If only there were a book about such a thing!”

“His eyes burn with hatred!”

“Do ye spout black blood and roll fin out?”

“I have seen the devil!”

“WILBA AM CONSUMED WITH REVENGE!”

A White Whale is a hostile Animal that has a chance to spawn after the player has tracked it down by examining Suspicious Bubbles, during Hurricane Season or Dry Season. This chance starts at 5% on day 1 and increases as days go by to a maximum of 33% on day 100. In Mild Season and Monsoon Season, the White Whale will not be encountered regardless of the day counter. They are considered innocent creatures despite being hostile, and killing one adds 6 points to the player's naughtiness level.

When killed, White Whale Carcass is dropped, which will take 3–5 days to fully bloat (only if it has been loaded once during that play session). When bloated, it can be popped with a Machete and will explode, dropping 4 Raw Fish, 4 Blubber, 1 Harpoon, 1 Bone Shards and 9 other random items.

The White Whale will attack the player if the player gets too close. Each attack is performed as melee, spawning two Big Waves. A player can safely kite one with an attack pattern of 3-4 swings, depending on movement speed. If more than one White Whale are close together they will attack each other.

By investigating some Suspicious Bubbles, the player can find a White Whale. These can be found randomly in the deep ocean biome and will change locations if ignored for a period of time. Once investigating Suspicious Bubbles three will pop in the same direction, if followed it will lead to another Suspicious Bubbles or the White Whale approximately two screens away. Upon uncovering the final bubble (there can be between 6 and 12 per hunt), the character will alert the player that the creature is close and a White whale will be spawned rather than another bubble. Note there is a 2/3 chance that a Blue Whale will spawn instead. 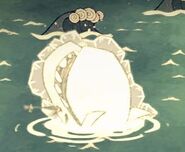 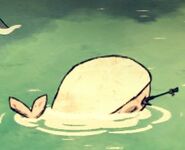 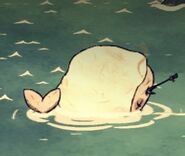 White Whale Carcass about to explode.

A White Whale as it appears in the Shipwrecked trailer.

A White Whale, as seen in the early access trailer for Shipwrecked.