“A creature of the night!”

“It's a lycanthropic pig.”

“Happens to the best of us.”

“Fascinating! It seems as though the lunar cycle has an unusual effect upon their intelligence.”

“It has been tainted by Fenrir.”

Werepigs are hostile mobs that Pigs, Guardian Pigs and Wildbores can transform into during a Full Moon or after a Pig eats 4 pieces of meat-based Monster Foods (

), Pig Traders and Royal Guards will not become Werepigs if these conditions are met. A typical Werepig will transform back into a normal Pig after 4 game hours (shorter for Guardian Pigs) of being a Werepig or at the start of the next day, whichever comes first.

Like most Monsters, they are hostile and will attack anything nearby (including other Pigs). Werepigs will stop to eat any Food on the ground and will produce Manure if they eat Fruits or Vegetables. Unlike normal Pigs, they will also eat raw Mandrakes. When killed, they drop 2 pieces of Meat and 1 Pig Skin.

Below is the number of hits it takes with each weapon to kill all variations of Pigs when playing with characters who have a default damage modifier. The Weather Pain is not included due to the random nature of its projectile.

Werepigs take 2 blasts from the Ice Staff to be frozen or 3 Sleep Darts to be put to sleep. 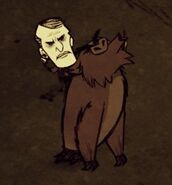 Putting a Werepig to sleep using the pan flute. 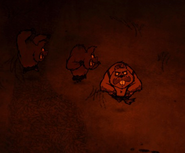 The Werebeaver being chased by Werepigs.

Werepig going through a stack of Berries - the player is safe standing near it and can even hit it once without being attacked back.

Werepig ignoring Wilson and running towards food on the ground. 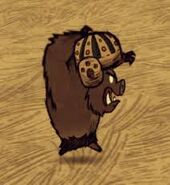 A Werepig wearing a Football Helmet.

A Moonrock Werepig in Don't Starve Together.

A group of Werepigs spawned by the Moon Stone event, as seen in the A New Reign: Part 1 trailer.

A Werepig along other monsters chasing Wilson in a promotional image. 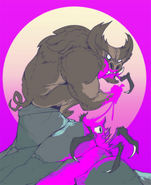 A Werepig as seen in a drawing from Art Stream # 95.
Polski Русский Tiếng Việt
Community content is available under CC-BY-SA unless otherwise noted.
Advertisement