“Some weather out there.”

“I've never seen a weather vane employed as a weapon.”

“I prefer to chop the trees myself.”

“Where does the air current originate?”

“I'm glad I'm not on the receiving end.”

“I think I'll see which way the wind blows before I use this.”

The Weather Pain is a ranged Weapon from the Reign of Giants DLC. It requires 10 Down Feathers, 1 Volt Goat Horn, and 1 Gears to craft, and an Alchemy Engine to prototype.

When used, it launches a whirlwind toward the target which will dance back and forth near the point of impact once it reaches the target, damaging enemies and destroying objects it comes in contact with.

In the Shipwrecked DLC, the Weather Pain can be used to destroy Obsidian Boulders.

In the Hamlet DLC, the Weather Pain crafting recipe is unavailable, however, a Blueprint for it can be bought with 100 Oincs from The Tinkerer's Tower. All of its ingredients are available at 'The Sty' Oddities Emporium. The Weather Pain can be used to destroy Suspicious Cracks in the Ancient Pig Ruins.

The Weather Pain's whirlwind after destroying a Poisonous Birchnut Tree. 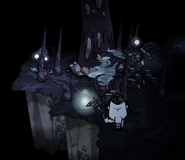 The Weather Pain being used against a Big Tentacle. The whirlwind will make quick work of the Baby Tentacles.
Retrieved from "https://dontstarve.fandom.com/wiki/Weather_Pain?oldid=448696"
Community content is available under CC-BY-SA unless otherwise noted.