“What a scientific marvel!”

“At any moment it could pop and spill its guts.”

“KEEP THAT AWAY FROM MY CIRCUITS!”

“A toy for children.”

“Could be fun times lobbin' these around.”

“Do you have any idea how much this suit cost?”

“We have to be gentle with our claws if we try to hold it!”

“A balloon, filled with water? What a funny idea.”

“I throw a killer curveball.”

“Don't worry, I have great aim! Or maybe you should be worried...”

The Water Balloon is a craftable Survival Item exclusive to Don't Starve Together. It can be used to extinguish Fires by throwing it at the fire. It can be crafted with a Science Machine using 2 Mosquito Sacks and 1 Ice, which gives the player 4 water balloons. Alternatively, mosquito sacks can be filled at Ponds, however this only yields a single water balloon.

In addition to putting out fires in a small area, it also protects objects from catching fire for 30 seconds, subtracts 5 degrees from players' temperatures, and adds 20 Wetness. However, only the players and the Dragonfly can get wetness from water balloons. If a player is 100% waterproof the water balloon won't burst upon contact and will simply roll away, essentially wasting it. 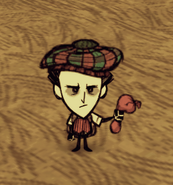 Wilson with a Water Balloon equipped.