Wanda is a skilled clockmaker who will stop at nothing to outrun her future.

Has excellent time management skills.
Only as old as she feels.
In a constant race against the clock.

“Wanda has been trying to outrun her future for longer than she can remember - but after a split-second decision left her tangled up in the Constant's timestream, it might be her past that's finally catching up to her...”

–From the description for Long Shadows

Wanda's backstory is revealed in the animated short Long Shadows, the details of which are summarized in her biography from the Compendium:

An enigmatic woman of... well, fluctuating age, Wanda was torn from the world she knew after accidentally creating a fracture in time and space, pulling her from her own timeline into the land of the Constant. Though she avoids divulging many details of her past with the other Survivors, she seems to have an odd familiarity with them, as though she's run into them before... or perhaps, later?

Wanda's special power is a Crafting Tab called "Clocksmithy". This allows her to craft 7 different character exclusive watches and tools with Time Pieces and other ingredients. Wanda will also gain a power buff in Shadow Equipment with old age, however she gets weaker with normal weapons.

Wanda does not have a health meter. Instead, she has an age meter, which ranges from a minimum of 20 to a maximum of 80 (at which age she dies). The age badge is separated with small notches every 5 years. Wanda's three stages are also marked as sections on the badge - young with very light color, middle-aged with purple color and elderly with dark purple color. She starts a game at an age of 38. This automatically counts down at a rate of 1 year every 40 seconds. Meaning every day she ages 12 years. She cannot receive any healing from any source other than the Ageless Watch, which rewinds her age by 8 years. Trying to heal via any source except the Ageless Watch will merely cause Wanda to remark: "That won't help, what I need is time!".

Instead of taking damage, Wanda ages by a number of years equal to 0.4× the incoming damage. (As such, she has an effective health of 150 as far as external damage calculations are concerned.) In addition, all changes to her health are applied gradually, meaning that she can take damage that would be fatal to her, but survive by quickly using an Ageless Watch to heal herself before all of the damage has been applied.

Wanda is considered young between the ages of 20 and 35, middle-aged from 36 to 64, and elderly from 65 to 79; this affects several aspects of her gameplay.

When using the Backstep Watch, Wanda's teleport distance is 8 when young, 4 when middle-aged, and 2 when elderly.

Wanda has a unique dying animation where her body is claimed by shadows, similar to the initial part of the animation for changing skins using a Wardrobe. As a result of being taken by nightmares, Wanda does not leave a Skeleton behind when she dies.

When attacking with Shadow Weapons (e.g. Alarming Clock or Dark Sword), she gains a damage modifier of 1.2× if middle-aged, or 1.75× if elderly.

As she ages, Wanda's mind becomes resistant to the deteriorating effects of equippable Shadow Items. Middle-aged Wanda loses only a third of the normal sanity drain over time, and elderly Wanda none at all, caused by equipping the Night Armor or Dark Sword. Note that this does not extend to the sanity drain of structures like the Night Light or Nightmare Ramparts, other insanity-inducing equippables such as the One-man Band or having soaked items in one's inventory.

Old Wanda deals half damage when attacking using anything that isn't a Shadow Weapon. This includes a depleted Alarming Clock.

Her reduced strength in her old phase also causes her to take more swings to break anything with a Hammer; the efficiency is reduced to 0.75, so any item will take roughly four-thirds as many swings as usual (e.g. 4 instead of 3 for a Hay Wall, 3 instead of 2 for a Chest, and 33 instead of 25 for a Moon rock Wall).

During old age, she cannot carry heavy objects such as Chess Pieces.

Great care must be taken when playing as elderly Wanda because the damage from freezing and starvation could very quickly kill an unprepared player due to elderly Wanda's persistent high age (low health).

Wanda's quotes can be found here. 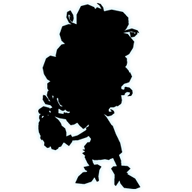 A silhouette of Wanda teasing her release.

A teaser for Wanda's animated short.

Wanda's icon on the Map.

Wanda's skull as seen in the game's files.

Wanda's forms struck by Lightning, showing she has bones in her hair and skirt.

Wanda's unique death animation, which does not leave behind a skeleton. 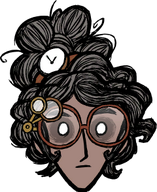 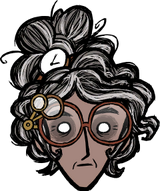 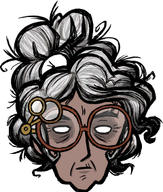 Wanda in her promo gif.

Wanda on the advertising banner of her Clockwork Bishop Costume skin. 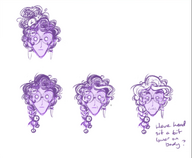 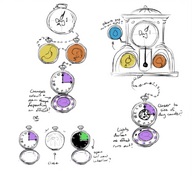 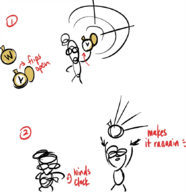 Clocks Use concept art from "Rhymes With Play" #282. 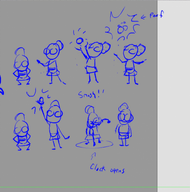 Wanda Aging concept animation and return back ages animation from "Rhymes With Play" #282.

Clocks Use concept animation from "Rhymes With Play" #282.