“It looks warm and cozy inside.”

“Why does everyone have a nicer house than me?”

“I HEAR A FAINT OORKING”

“Some kind of temporary habitation.”

“Walruses are nearby, eh?”

“The Walrusser can't be far.”

“A dome shelter. Is a walrus capable of constructing that?”

“Maybe they'll invite us in?”

“Some outdoorsy types made this.”

“How adorable. They think they're people!”

“I wonder how long that took to build?”

“They would not roam, too far from home.”

“I've heard of houses like this, but I've never seen one!”

“Nobody ever invites me in. I'm starting to take it personally!”

A Walrus Camp (or Igloo) is a naturally generated and indestructible structure that spawns MacTusk, Wee MacTusk, and Blue Hounds. It's used as a base by these Mobs, known collectively as the MacTusk 'n' Son Scottish Nobleman Walrus Hunting Party. The Walrus Camp will only spawn mobs during Winter. Walrus Camps will spawn on all terrain, except Marsh Biomes. The igloo often appears near Maxwell's Door, and two or more will often spawn in a close vicinity to each other. The MacTusk Hunting Party will spawn about every 2.5-3 days from a fully functioning Walrus Camp.

“If they are not in there, where are they?”

“It has been deserted for now.”

“This won't be safe come winter.”

“I best not linger when winter comes.”

“Incredible. Just a hole, no signs of a camp at all.”

“They have departed för a great jöurney.”

“I think someone was here.”

“They picked up and left in a hurry.”

“The walruses aren’t too keen. There’s none here to be seen!”

“Somebody here before, florp.”

“An abandoned campsite... I wonder who was here?”

When it's not Winter, an inactive Walrus Camp is a big dark brown circle on the ground, which can be walked over. Regardless of the season, the Walrus Camp appears as an igloo on the map.

To kill MacTusk without taking too much damage, chase MacTusk far enough to the point where it will ignore the player and attempt to walk back to its home. It will continue to walk even if being hit by the player. Since the Blue Hounds are closer to Wee MacTusk and being too far from home, the player will be able to kill MacTusk without much trouble. After the kill, simply go back and finish off the Blue Hounds.

Another way that works only once (before resetting) is to place Tooth Traps and Bee Mines in the area in front of the igloo where the hunting party will come out. A row of four Bee Mines and a few Tooth Traps around them is enough to take down the party.

Furthermore, as Wendy, using a riled up Abigail to take the Hounds out while taking hits from MacTusk can be a viable strategy. Abigail can even outrun both MacTusk and Wee MacTusk while she stuns them upon dealing damage, making quick job of them without too much trouble.

Since Walrus Camps keep respawning the party, it's possible to trap them or kill them as they spawn. One of the best ways is to build 3 or 4 Pig Houses and make the Pigs fight the walruses and hounds. However, Pigs will only attack the hounds but not the 2 walruses unless provoked. It is advisable to make this during summer since these mobs are not around. A player can use a Hammer to smash a single wall to get the loot inside (as shown in Gallery) after the Pigs have killed the Hunting Party. Be warned that the player will not get meat drops since the surviving Pigs will eat the meat on sight.

If playing as Wickerbottom, one method of farming can be using one of her Books "On Tentacles" to summon three Tentacles around the Camp. Then enclose it with walls in a tight space and make sure that the area is passable. There must be no single "exits" so that  MacTusk and Wee MacTusk have no chance of running away. This should preferably be done when it is not winter, so the Party is not present. Care should be taken when gathering the loot from around the surviving Tentacles, for obvious reasons.

If playing as Webber, another method of farming is to set up about 3-4 Spider Nests surrounding the Walrus Camp. Doing so allows the hunting party to automatically fight the spiders when they emerge. If there are enough Spider Nests, Spiders will win the fight, otherwise, they will distract MacTusk allowing the player to kill him easily as he won't be running away from the player when fighting. Spiders will eat the Meat, especially if they win, however other drops from the hunting party will simply be lying around and can be collected at any time.

Walrus Camp as seen in the poster for A Winter's Tale update. 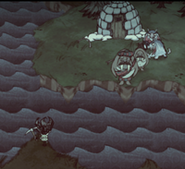 The MacTusk N' Son Hunting Party, outside their Walrus Camp beginning of winter.

Walrus Camp during the winter, with the wandering Party.

The MacTusks' Blue Hounds sleeping by the igloo at night. 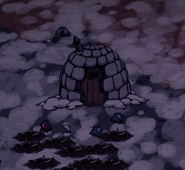 An unlit Walrus Camp at night, indicating it is empty. 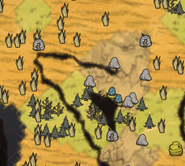 Walrus Camps, as they appear on the Map. Another example of Mactusk Farming.