“Amazing! I can still see the lava underneath.”

Volcano Turf is one of the Turf items that appears in the Shipwrecked DLC, acquired by digging Volcano tiles with a Pitchfork. Like other Turfs, it can be placed on any bare ground tile or used as fuel.

Plants like Berry Bushes, Grass Tufts, Saplings, Spiky Bushes, Bamboo Roots, Viney Bush Roots, Coconuts, and Jungle Tree Seeds cannot be planted on these Turfs. Elephant Cacti and Coffee Plants can be planted on these turfs. Flooding can happen on this turf, but this is not seen unless transported due to floods not spawning in the volcano.

Lureplants can be planted on this Turf, but Eyeplants cannot spawn, so it is great for Lureplant farms while not spending any more resources than those used to craft the Pitchfork. 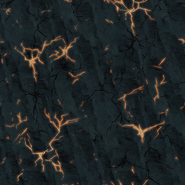 Volcano Turf as seen on the Map.
Español
Community content is available under CC-BY-SA unless otherwise noted.