“My scientific know-how tells me that's a perfectly safe mountain!”

“The biggest, fieriest fire in all the land!”

“Is calling me to fight!”

“The mountain that spews death to the heavens!”

“I HAVE FOUND THE EARTH'S GEOLOGICAL EXHAUST SYSTEM”

“Tectonic activity at its finest!”

“I respect its power.”

“Certainly implies there is a molten core to this world.”

“IT SPIT FWOOSHING AND SPOUT RAIN!”

“A blistering adventure waiting to happen.”

The Volcano is a naturally occurring object which can be found in the Deep Ocean Biome. The map is limited to only one Volcano. It can be climbed to access the area near the mouth of the Volcano. It also acts as a light source regardless of the season. The Volcano is usually found at one of the edges of the map. When the Volcano is approached, the camera zooms out until the player can see it as a whole.

“Not with a bang, but with an ERUPTION!”

“The earth's mantle is churning!”

“There's no need for such an outburst.”

“Look at that! The volcano's about to blow!!”

Soon after the flooded areas have dried up completely in Dry Season, the Volcano will start to erupt. Tremors occur three times before each eruption, giving slightly more than half of a day to prepare. When the volcano erupts, Dragoon Eggs rain down from the sky, each briefly showing a shadow where it will land, and targeting areas within and slightly beyond the player's view. Dragoon Eggs deal 300 damage on direct hits to the player character and any Mobs struck.

When falling on land, Dragoon Eggs destroy most structures and set things on fire, and sometimes leave behind Lava Pools. The Pools are a source of light and heat and will disappear less than half of a day later, leaving Rocks, Charcoal, Flint, and Ashes behind.

When falling into the Ocean, Eggs create Big Waves that damage the player's Boat. As the volcano is erupting, the player's view is partially obscured with ash clouds that persist for some time after the eruption ends. During eruptions, birds stop spawning.

During each eruption, a few Dragoon Eggs remain intact enough to hatch approximately less than half a day later. During the hatching process, the Egg will make cracking noises as well as shake and jump.

Eruptions last about 30 seconds, with 1.5 days between each eruption. However, during the last days of the season, eruption frequency and duration massively increases.

The Altar of Snackrifice can be used in order to either delay the eruption or expedite it.

An erupting volcano, during Dry Season. 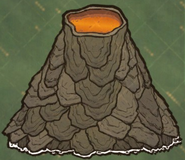 The Volcano's icon on the map outside of Dry Season. 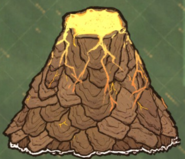 The Volcano's icon on the map during Dry Season.

The Volcano erupting, as seen in the Shipwrecked trailer.

Volcano as seen in the poster for the Wilbur Vs. The Volcano update.