“You might be something to reckon with, big dog.”

“A true bastion of evil.”

“IT LIVES TO EAT LARGE THINGS”

“That Canis will never be domesticated.”

“That thing could pull a sled by its lonesome.”

“Curious. Does it control the hounds with hypnosis?”

“I don't think that puppy is very happy.”

“Leader of the pack.”

“Quite the set of chompers on that one.”

“I'll not be a feast for that beast!”

“What big teeth he have!”

“Are they a friend of yours, Woby?”

“I guess I was bound to run into you sooner or later.”

The Varg, also known as the Warg, is an aggressive Mob in the Reign of Giants DLC. When tracking Suspicious Dirt Piles, there is a chance for a Varg to be found instead of a Koalefant or a Ewecus. This chance starts at 2.5% on Day one, and gradually increases to 16.5% chance on Day 100. When killed, the Varg drops around 4-6 Monster Meat and 1-3 Hound's Tooth.

The Varg takes 3 hits with the Ice Staff to be frozen, and 1 Sleep Dart to be put to sleep.

The Varg will howl, calling forth two Hounds to the battle. Vargs are able to summon both normal and special Hounds (based on the season), which is decided at random. It should be noted that Blue Hounds can appear in Winter and Spring while Red Hounds can appear in Summer and Autumn.

A Varg's Hounds are bound to it, and will immediately aggro on whatever the Varg itself was targeting when it summoned them. Summoned Hounds will also return to their Varg if they lose interest in their current target. If engaged for long enough, the Varg will howl again to summon more Hounds.

At close range it attacks by biting, with a two-hit delay. It moves slowly, but attacks quickly and has a large range for its jaws.

The Varg can effectively be used as a way to spawn Hounds if there are no nearby Hound Mounds (or all the Hound Mounds in the current world are destroyed).

One way to do this is by leading the Varg into a pen with a large gap in the side. The player should run into the pen and put the Varg to sleep once it follows inside. The player must then exit the pen and close the gap. The Varg will still summon Hounds if the player wanders too close, but it will not attack any of the walls that confine it.

Below is the number of hits it takes with each weapon to kill a Varg when playing with characters with a default damage modifier. The Weather Pain is not included due to the random nature of its projectile. 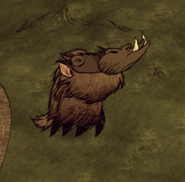 A Varg howling to summon Hounds.

A Varg put to sleep.

Wilson being chased by two Vargs.

A Varg as it appears in the Reign of Giants trailer.

A Varg as seen in a drawing from Art Stream # 21.
Русский Tiếng Việt
Community content is available under CC-BY-SA unless otherwise noted.
Advertisement