Edit
watch 04:03
Wiki Targeted (Games)
Do you like this video?
Play Sound
“The ground. You step on it.”

Turfs are floor and ground tile items. They can be dug up with a Pitchfork and used for decoration or fuel. Turfs can fuel all structures except the Night Light. Turfs cannot be used to fertilize plants.

Roads and Trails are not turfs and cannot be moved. If the player digs up a Runic Turf, it will be destroyed. Cobblestones gives the player 30% faster movement. Scaled Flooring reduces heat.

In the Shipwrecked DLC, Puddles cannot spawn on craftable turfs but they can still flood them. Coffee Plant and Elephant Cactus can only be planted on ashy, magma, or volcanic turfs, but they can grow on any turf after they have been planted.

Turfs as seen in the poster for the Turf! update. 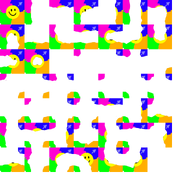 The first, test version of the turf connection
Español Русский
Community content is available under CC-BY-SA unless otherwise noted.
Advertisement