“Alone and rolling through life.”

“IT COULD CONTAIN MANY THINGS.”

“A dried collection of plant matter.”

“I wish it was sturdier so I could chop it.”

“What secrets do you hold?”

“Rollin' along the road of life.”

“Does it know where it wants to go?”

“It's just minding its own business.”

A Tumbleweed is a form of flora found in the Reign of Giants DLC. They spawn from an invisible spawner in the Desert biome and can be found tumbling around, often in groups; they may also tumble from a Desert into nearby biomes. Catcoons can also spit up Tumbleweeds. When the player is near a Tumbleweed, it will make a musical sound.

The player can harvest a Tumbleweed to get 3 random items generated on the ground. If the generated item is a non-passive Mob, it will attack the player character. Each item is generated independently, therefore it is possible to get more than one of an item from a single Tumbleweed. Possible items include Gems and other previously non-renewable items, making them renewable. Food items gathered from Tumbleweed have full freshness.

The following table lists the items that can be generated when a Tumbleweed has been harvested:

In Don't Starve Together, tumbleweeds also provide a backup source of Chess Piece Sketches - either directly in the form of sketches themselves, or indirectly in the form of Chess Trinkets. These will drop only if each piece was unlocked in the world. Rook, Knight and Bishop trinkets are unlocked by reanimating each of the repaired Marble Sculptures during a Full Moon or New Moon. The Pawn and Queenly sketches are unlocked by mining their respective Marble Statues, while the Kingly sketch is unlocked by mining the Maxwell Statue.

Additionally, Saffron Feathers can drop from tumbleweeds, chance of Seeds drop was reduced and Blueprint recipes restricted. In general, tumbleweeds can only spawn recipes that can be prototyped at an Alchemy Engine or Shadow Manipulator, including the low-tier recipes unlocked by Science Machine and Prestihatitator. 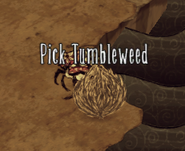 A Tumbleweed on Fire after bouncing across Magma.