“What a tropical looking fish.”

“YOU ARE TROPICAL, AND A FISH”

“Are you ready to become fish'n'chips?”

“It belongs on a skewer.”

“A beautiful fish! But I dare not consume it raw.”

“Inside it is the cölör öf meat!”

Tropical Fish is a type of Fish Food introduced in the Shipwrecked DLC.

They can be obtained by fishing in a Shoal or Tidal Pool with a Fishing Rod or rowing over it with Boats with an attached Trawl Net. Fish Farms that have been stocked with Roe have a chance to continually produce Tropical Fish.

Tropical Fish can be used in Crock Pot, and counts as 0.5 units Meats and 1 units of Fishes. Cooking Tropical Fish on a Fire will yield a Cooked Fish Morsel. It can also be dried to get Small Jerky. It can be traded to Yaarctopus for Dubloons. 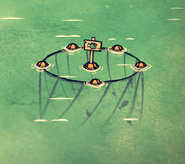 A Fish Farm stocking Tropical Fish, visible from the blue fish on the small sign.
Retrieved from "https://dontstarve.fandom.com/wiki/Tropical_Fish?oldid=433283"
Community content is available under CC-BY-SA unless otherwise noted.