“A tree that knows only pain.”

“A tree with a foul demeanor.”

“It abounds with twigs.”

“A harsh tree for harsh conditions.”

“Me and spikes don't get along.”

“A sickly tree, so sharp and slender.”

“Shouldn't play too close to those, florp.”

“Not a good tree for climbing.”

Spiky Trees are found only in the Marsh. Instead of dropping Logs when chopped like other trees, Spiky Trees drop Twigs with only a 20% chance to drop a Log. Also, these trees do not have a life-cycle (changing size over time). There is also no way to replant them. Like other trees, the stumps of the Spiky variety can be dug up with a Shovel or Regal Shovel to get an additional log.

In the Reign of Giants DLC, Spiky Trees can also be found in the Desert biome. 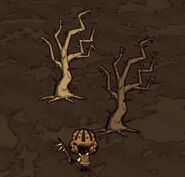