“Nature is so boring.”

“I've heard them described as "piney".”

“I deduce it's not one of the possessed kind.”

“Pines are always greener on the other side of the fence.”

“Reminds me of winter. Yuck.”

“A soldier of the exotic forest.”

“Well, it looks lifeless enough, but you never can tell.”

Trees are Plants generated randomly with each new map and can be naturally found anywhere except in Rockyland or Savanna Biomes (although they may still be planted there). Evergreens are most commonly found in Forests and Grasslands.

Trees are the primary source of Logs and Pine Cones. They can be chopped down with an Axe or by Pig followers. A felled tree leaves behind a tree stump, which can be dug up with a Shovel for an extra Log.

Evergreens have a 4-stage life cycle (small, medium, large, and aged) which they continuously cycle through. Once cut, stumps do not regrow into trees nor do new trees spawn naturally; the only way to get more trees is to plant them with Pine Cones. Tree stumps, however, are treated as normal trees by the game: they are shown on the map as normal trees and they change their size from small to aging continuously like trees do. Planting a Pine Cone will produce a sapling tree which will grow into a small Evergreen and follow the life cycle until it is chopped down or burned. The number of strikes needed to chop down a tree varies by its size and state. Basic Axe can chop down small trees in 5, medium trees in 10, and large trees in 15 strikes. Aged or Burned trees take a single strike to be chopped down.

When a tree is chopped down, a nearby Evergreen may stand up and become a Treeguard. After day 3, each tree felled has a 1.3% percent chance of spawning a Treeguard from a nearby Evergreen, including trees that have been planted by the player. The Treeguard will chase whoever chopped down trees near them until the player plants enough Pine Cones to pacify it or runs beyond the Treeguard's attack range. Since Treeguards are quite slow, they're relatively easy to outrun. Note that a pacified Treeguard will "hibernate" into a normal Evergreen - it will appear as a normal Evergreen but will actually be identified as a Treeguard when hovered-over. Treeguards that have been simply outrun will wander about in their active form.

If a tree is exposed to fire (such as from an uncontrolled Campfire, a Torch, or other nearby burning object) it will quickly ignite and can rapidly spread to nearby trees or other plants. Forests in particular are prone to large forest fires. The damage caused by fire will kill small creatures like Birds and Rabbits almost instantly and can damage the player if they stand too close. Burning trees produce a great deal of light and heat, however they burn out quickly. Once a tree is consumed by fire, it will be reduced to a burnt tree, which can be chopped down with an Axe to produce a piece of Charcoal (and occasionally a pine cone or two). In DST, sometimes a burnt tree will drop two pieces of charcoal. Stumps that have been burned will turn into Ashes.

In the Reign of Giants DLC, standing under an Evergreen will provide shelter, granting 35% Wetness resistance, and preventing held Torches from being affected by Rain. If the player's temperature is greater than 63°, it will also provide a cooling effect of 45°. For every item the player has equipped that provides resistance from Overheating, they will receive an extra 180 points of protection.

Burnt trees will not provide shelter. However, Aged trees will.


In Don't Starve Together, Evergreens may petrify after an unknown period of time, followed by an announcement from the character. Petrified Trees are mined instead of being chopped, and may result in Rocks, Nitre and Flint.

There are Minimap icons for tree stumps and burnt trees instead of showing as normal trees.

Aged trees will not provide shelter, unless they are petrified. Shelter will always provide 180 points of protection from Overheating, regardless of how many items the player has equipped that provide resistance from Overheating.

An Evergreen sapling produced by planting a Pine Cone. 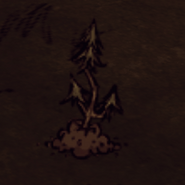 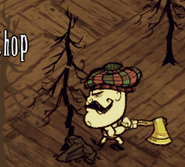 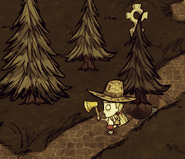 A bugged flying tree, which cannot be chopped.

Another bugged tree, which appeared on the Ocean.

A group of Evergreens in the very early alpha of Don't Starve.

Evergreen sapling and stumps as seen on the 2018 Valentine Cards.
Retrieved from "https://dontstarve.fandom.com/wiki/Tree/Evergreen?oldid=455958"
Community content is available under CC-BY-SA unless otherwise noted.