“This tree is spooky. I bet it likes Halloween.”

“Fagales of some kind. It bears fruit when fully grown.”

“I've heard them described as "leafy".”

“A tree. But it gives off a strange energy.”

“My, what nice foliage you have.”

“It comes in so many colors!”

“A bouquet of leaves.”

Birchnut Trees are Plants found in the Reign of Giants DLC. They are found mainly in Grasslands and Deciduous Forests. When chopped, they will yield 1-3 Logs and up to 2 Birchnuts, depending on the season.

If cut in its prime (the largest form) it will yield 2 Birchnuts in Autumn (colored leaves), 1 in Spring and Summer (green leaves), and no Birchnuts in Winter (leafless). Standing under one offers moderate wetness protection from Rain, and slows Overheating.

“It looks unhappy about me stealing those birchnuts!”

“A fire would set him straight.”

“Is big and angry tree.”

“THE MONSTER WITHIN REARS ITS HEAD”

“That is no tree I've seen before!”

“You're due for a chopping.”

“Fantastic! I wonder what has possessed it.”

“What're you so mad about?”

“Swell. Even the trees are alive.”

“It is no longer bound to the earth!”

“What you looking at, florp?”

When cutting down a fully sized Birchnut Tree that drops Birchnuts from day 3 and after, there is a small chance that other Birchnut Trees in the area will "awaken" and begin attacking anything in the area, unless it is Winter. This chance increases with the number of days survived from 3% on day 3 to 33% on day 70. After enough time passes (minimum one day,) Poison Birchnut Trees will calm down and return to their normal state. The player can also plant Birchnuts nearby to attempt to pacify them.

A Poison Birchnut Tree can spawn up to 5 Birchnutters to attack the player or nearby Mobs. They will also do a root attack, behaving similarly to tentacles, that will attempt to home in on the player's position.

In the Shipwrecked DLC and Hamlet DLC, Birchnut Trees will not gain colored leaves in any of the seasons, and neither will they lose their leaves. To get more Birchnuts, the player has to kill Poison Birchnut Trees and Birchnutters, travel to a Reign of Giants world by Seaworthy or Skyworthy, or buy them in the Swinesbury Fine Grocer's shop.

In Don't Starve Together, Poison Birchnut Trees require 18 swings to be felled with an Axe, and the chances for them to spawn is dependent on the season. Birchnut Trees will start losing their leaves during the last 3 days of autumn.

Birchnut Trees of various colors that appear during Autumn.

A bare Birchnut Tree during Winter.

Maxwell with some Birchnut Trees in Spring, as he inspects one.

A root spawned by a Poison Birchnut Tree to attack its target when close. 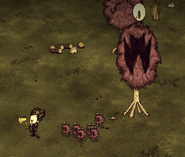 A bugged Poison Birchnut Tree that has lost its leaves.

Birchnut Trees as seen in the Reign of Giants release trailer.

A Poison Birchnut Tree as seen in a drawing from Art Stream # 61.

A Poison Birchnut tree and some Birchnutters in a wallpaper.
Retrieved from "https://dontstarve.fandom.com/wiki/Tree/Birchnut?oldid=447373"
Community content is available under CC-BY-SA unless otherwise noted.