“It's a bit passive aggressive, but it'll work.”

“I AM ADEPT AT WEAVING”

“Only the dumbest animals will fall for this.”

“A well cönstructed trap. I will have my meal.”

“Now we can catch some food!”

“Catch me a beach breakfast!”

“I do not wish to be so tricky, but the dinner bell calls me.”

“I need to trap something good. Preferably a sandwich.”

“All the trappings of a good dinner. Ha!”

“We learned how to make them in the Pinetree Pioneers.”

“The trap is fine, it's the part afterwards that makes me sad...”

A Trap is a Survival item used to catch small animals such as Rabbits, Frogs, and Spiders. It can be crafted at the beginning of the game with 6 Cut Grass and 2 Twigs.

Once set, Traps can be baited with food items attractive to said animals. Baited or not, a Trap will trigger once a small mob moves close enough to it.


Traps are set by placing them on the ground and can be picked up again at any time. To bait a Trap once set, simply place a food item in it. Bait will be consumed upon a successful catch. Once a Trap has caught something, it will shake and rattle around with the animal inside.

Traps do not need bait in order to catch creatures; if a creature touches the Trap for any reason, it will fall and possibly catch it. This means if a Trap is placed directly on top of a Rabbit Hole, it will attempt to catch the Rabbit when it leaves home or comes back. However, sometimes a Rabbit will disappear into its hole before the Trap falls completely, leaving no loot.

Rabbits are placed into the player's inventory when Traps are harvested. Caught Spiders and Frogs instead automatically deposit the loot that would be gained from killing them normally.

A hostile creature can be lured into a Trap if it is chasing the player character; Spiders for example will always try to travel in a straight line and make no effort to avoid traps or other obstacles. Traps can be used in this way to form a barrier when destroying Spider Dens, or as a great method to farm Silk.

Traps are particularly useful during Winter, as they can be spread around a large area and placed atop Rabbit Holes for instant capture. In vanilla Don't Starve, Chests can be built nearby Rabbit Holes and filled with Rabbits to create a food stockpile.

In DLCs, the creatures caught under a trap will struggle for a few days before starving to death and dropping their loot on the ground. For example, a Rabbit will starve under a trap in two days, the same time it does in the inventory. If the loot (such as a Morsel) can spoil, it will do so as normal while on the ground. The loot will also be open for any creatures to eat or steal as their normal rules. After the creature has starved to death, the trap will remain in its sprung state.

In the Reign of Giants DLC, Moleworms tunneling underground will trigger Traps. Even though Flint and Rocks can be used as bait, Moleworms cannot be caught with Traps.

In the Shipwrecked, Crabbits can be caught using Traps. Placing a Trap on a Crabbit that buried itself will easily catch it.

While inside a Hamlet world, Traps can be used to kill Scorpions, Pikos, Poison Dartfrogs, Rabid Beetles and Weevoles. They can be bought for 2 Oincs at The Boar's Tusk Weapon Shop in the Pig City.

In The Gorge event for Don't Starve Together, Traps function almost identically to the way they do in normal gameplay, other than the fact that they have no durability and can be used an infinite amount of times. They are used to catch Rabbits. Traps can be purchased from Billy for 4 Old Coins each. 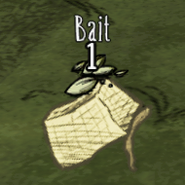 A baited trap luring a Rabbit.

A baited trap capturing a Rabbit.

A Trap that has caught something.

A Trap triggered by a Moleworm.

A Trap that has been triggered but not caught anything.

Traps being used to capture Spiders.