Edit
watch 03:01
Wiki Targeted (Games)
Do you like this video?
Play Sound

The Trade Inn (or Trade INN) is a feature exclusive to Don't Starve Together. It is used to trade in multiple common Skins for rarer ones. The machine works by taking nine items of the same tier and giving the player a single skin a tier higher. However, there is a rare chance of the machine giving out a rarer skin that is two, three, or even four tiers higher (capped at Elegant).

The Trade Inn is run by the Curio Collector.

Ravin' Wrapper Raiders is a minigame added to the Trade Inn during the Hallowed Nights 2019 event. Players can enter the game by clicking on the crow. The usual Trade Inn interface changes to an 8 x 5 grid with tiles containing a random assortment of candy wrappers and at least one crow. The premise of the game is that the crows have stolen the Curio Collector's candy wrapper collection and it is up to the player to help him scare the crows away.

A Feastin' Pair of Birds[]

“Let's play a game! Use that big brain to match pairs of food from the feast!”

A Feastin' Pair of Birds is a minigame added during the Winter's Feast 2019 event. To access the game, the player must click on the Snowbird on the top left of the Trade Inn interface. Similar to usual mix and match memory games, the game requires the player to memorize the tiles and match them correctly. When a match is created, two tiles fall into the 3 x 2 grid, showing the tiles until the player skips, then flipping over. The game ends when/if the player runs out of their 3 starting guesses. There are only 5 types of tiles to ensure that there is always at least one match. If two Snow bird tiles are cleared, the player will gain an additional guess. The goal of the game is to get the highest score.

If the player gets a score of 10 or more matches, they will be rewarded with a Snowbird Profile Icon.

An Eggy Tally is a minigame that was added as part of the Troubled Waters update. Players can start the game by clicking on the Redbird in the Trade Inn interface. The game is a timed mental-math puzzle in which numbers in vertically/horizontally adjacent squares can be additionally combined with the goal of making as many 100's as possible. When a 100 is formed, the square containing that 100 is permanently replaced by a fresh egg (if the 100 was created before the timer ran out) or a rotten egg (if the 100 was created after the timer ran out); however, the egg will remain on the board, permanently occupying its square and gradually increasing the difficulty of forming future 100's. The game will not allow any squares to go beyond 100 in value. The game ends when there are no possible number combinations left on the board.

If the player gets a rotten egg on the board, they will be rewarded with a Rotten Egg Profile Icon.

If the player gets 6 or more fresh eggs on the board, they will be rewarded with a Egg Profile Icon.

If the player gets 12 or more fresh eggs on the board, they will be rewarded with a Redbird Profile Icon.

The quotes spoken by the Curio Collector:

A Feastin' Pair of Birds[] 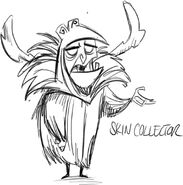 Sketch of the Curio Collector (then named Skin Collector) from the tumblr of Jeff Agala, an artist who works on the game.

Curio Collector as seen in a promo image for Year of the Beefalo.

Animated promo featuring the Curio Collector for Year of the Beefalo. 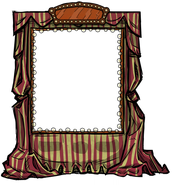