“It's always a good idea to touch base.”

“I guess I should touch it?”

“DO YOU BELIEVE IN MAGIC?”

“That stone has regenerative powers.”

“Another chance to fulfill my destiny!”

“Some sort of religious monument maybe?”

“IS'T WAY BACK FROM UNDISCOVER'DED COUNTRY”

“The perfect precious stone for any adventurer.”

“Does anyone actually stay dead around here?”

“Bring me back from death’s dark planes!”

“It must've been used by an ancient civilization!”

“Hopefully I'll never have to use it.”

A Touch Stone is a structure found randomly on the surface world. Activating it will allow the player to be resurrected upon death.

A Touch Stone is always surrounded by 4 Pig Heads. The Pig Heads are not needed for the Touch Stone to function and can safely be deconstructed using a Hammer. The Wooden Flooring can also be taken without affecting the Touch Stone's usability.

When a Touch Stone is activated (by clicking on it), a small platform will rise out of the ground. After being revived on the platform, the Touch Stone will be destroyed by a lightning strike, dropping 2 Rocks, 2 Marble, and 1 Nightmare Fuel. WX-78 will become overcharged by the lightning during the resurrection.

Unless another Touch Stone or revival item is found, the next death will cause Game Over, which will require the player to restart from scratch.

In the Shipwrecked DLC, Touch Stones have the same function, and differences are due to item replacements in the DLC. Instead of Pig Heads, a Touch Stone is surrounded by Wildbore Heads. Using the stone to resurrect will yield Limestone instead of Marble.

In the Hamlet DLC, Touch Stones are not present in the world.

In Don't Starve Together, Touch Stones work differently. They spawn in their activated state, meaning they cannot be activated by a living player. They are only usable by Ghost Characters as a means of resurrection via haunting. A single Touch Stone can be used more than once by different players, regenerating quickly after use. Every resurrection produces Marble and Nightmare Fuel. However, each player can only use any single Touch Stone once; haunting it again will not revive the player again.

It is advisable for other players to remain off-screen during a resurrection as the Lightning produced may strike them instead of the Touch Stone.

Touch Stones can also be found in the Caves, unlike in the single player version of the game.

Below are listed player's stats upon revival. 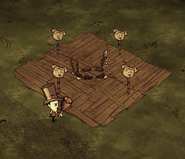 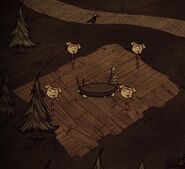 An unactivated Touch Stone as found in the Shipwrecked DLC.

The eyes of Wildbores glowing during a full moon.

WX-78 standing next to a Touch Stone during a full moon in Shipwrecked.

A Touch Stone in the Caves.
Français Polski Tiếng Việt
Community content is available under CC-BY-SA unless otherwise noted.
Advertisement