“Something to hold back the night.”

“Fire is so pretty.”

“I attack night with fire stick.”

“A tiny bulwark against the night.”

“It keeps Charlie at bay.”

“This should keep us safe.”

“Not great for caramelizing creme brulee, but it will do for seeing.”

“Now I can spot treasure in th'dark!”

“Nothing more useful than a stick on fire.”

“There's beauty in a simple design.”

“I won't go astray if this lights my way.”

A Torch is a portable light source with a much smaller radius than a Campfire. It is made with 2 Cut Grass and 2 Twigs, and it is available to craft from the beginning of the game.

It only burns (and as a result loses durability) while it is held, regardless of what time of day it is. A Torch will stay lit for 75 seconds (2.5 game hours). In Rain, a Torch may burn up to 150% faster (depending on precipitation rate).

In the Reign of Giants DLC, Torches will not be affected by Rain if the player is sheltered. Striking a Mob with a Torch may set it on fire.

In the Shipwrecked DLC, Torches are affected by Strong Winds, causing them to burn up much faster than normal. In addition, Torches can be used to make Boat Torches.

In Don't Starve Together, Torches provide 20% Wetness resistance when equipped.

To equip and use a Torch, right-click it from the inventory. As long as the player is holding the Torch, it will burn with a consistent intensity and illuminate a small area around the player.

Dragging a Torch over objects such as Trees, Spider Dens, or Beehives and right clicking, or equipping a Torch and right clicking on such objects, will light them on fire. If the burning object contains creatures like a Beehive does, they will exit the structure when it is set ablaze. Burning objects will also ignite other objects (or creatures) if they are nearby, possibly spreading to cause massive fires.

Torches can be used as weapons to deal 17 damage per strike.

If the player has an extra Torch, it will be automatically equipped in place of the spent Torch. 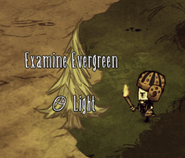 Prompt when the cursor is above an object that can be lit. 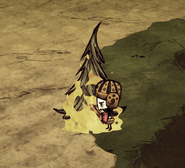 Lighting a Tree on fire.

Wilson with a Torch in a promotional image.

Wallpaper of Wilson using a Torch to look down a Sinkhole.

Wilson holding a Torch, as seen in the The End of the Beginning update trailer.

Willow toy collectible with a Torch.
Retrieved from "https://dontstarve.fandom.com/wiki/Torch?oldid=440222"
Community content is available under CC-BY-SA unless otherwise noted.