“Yeesh! I'm not kissing that!”

“It's covered in nasty warts and fungus!!”

“Just swallow us whole and end our misery.”

“PUT IT BACK IN THE GROUND”

“It has formed a dangerous symbiotic relationship with fungal spores.”

“What massive legs you have!”

Upon death, Toadstool drops 1 Frog Legs, 1 Mushroom Cap of each type with other two 33% chances to get an extra cap for each type, three to five Meat with a 50% chance to get the fourth piece and another 25% chance to get the fifth piece, one Shroom Skin, and 2 Rare Blueprints. The first blueprint will always be of a Funcap (with equal chances) and the second one will always be a Mushroom Light, having a 33% chance of being a Glowcap. It will additionally drop a Shroom Skin every time its health reaches 70% and 40% (and 20% for Misery Toadstool).

The Toadstool has the ability to attach a Spore Bomb to any player within 10 range, providing a bit of light until it explodes into a Spore Cloud 3.5 seconds later, which lingers for 1 minute and damages players as long as they are in it. The Spore Cloud will also rapidly spoil any perishable item within its area, making a fight with a Ham Bat inefficient.

The Toadstool will also hop on the ground when its health reaches less than 40%, causing a Slam attack similar to the one done by Bearger.

It initially takes 4 blasts from the Ice Staff to freeze it and 4 Sleep Darts to put it to sleep, with each number ramping up as the player utilizes these attacks.

The Misery Toadstool is an advanced variant of the Toadstool. It has the same behavior, but with higher health/attack/defense/etc. Its appearance is slightly changed, carrying black mushrooms with yellow dots on its back, rather than purple ones. All Boomshrooms and Sporecaps spawned by the Misery Toadstool will also have their colors changed. The Misery Toadstool has a guaranteed drop of both the Glowcap and Mushlight blueprints, as well as the Blueprint required to prototype the Napsack upon death.

The Toadstool respawns after 20 days, same with the Dragonfly and Bee Queen. It spawns randomly in one of the three locations of a mushroom hole inside the cave, thereby making its shroom skin renewable.

Caves
The Toadstool Cap is a naturally spawning object in the Caves that spawns Toadstool after being chopped enough times with an Axe.

“A big gross mushroom! Burn it!”

“We must destroy that towering Agaricus.”

“Mushrooms don't have no reason to be that big.”

“I don't like how much magic is collecting in that.”

“I think it's doing something bad!”

Below is the number of hits it takes with each weapon to kill a Toadstool when playing with characters with a default damage modifier. The Weather Pain is not included due to the random nature of its projectile.

“A mushroom cloud in the making!”

“Everyone, give the volatile Agaricus wide berth!”

“We should get far away from that.”

“My handbook says not to pick mushrooms you don't recognize.”

“I knew there was a reason I don't like mushrooms!”

Boomshrooms will be spawned in groups of four or more by the Toadstool during the fight. They will pop out of the ground, immediately start growing and explode after a few seconds, causing damage to any players or mobs nearby. The amount of Boomshrooms varies by the Toadstool's charge level and by its current health. Boomshrooms spawned by a Misery Toadstool will have different colors. 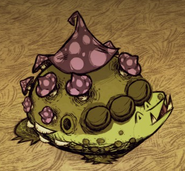 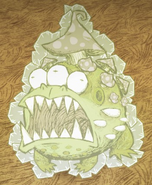 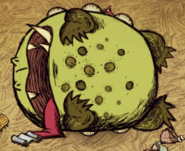 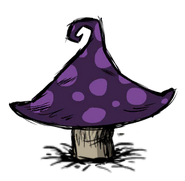 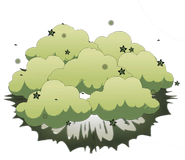 Toadstool as seen in the A New Reign: Part 2 trailer.

Toadstool and a few Sporecaps as seen in the A New Reign: Part 2 trailer.

Toadstool as seen in the A New Reign trailer.

Toadstool in the Warts and All update poster. 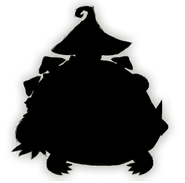 Toadstool silhouette from the in-game Warts and All teaser.

The concept teased in an episode of Rhymes with Play. 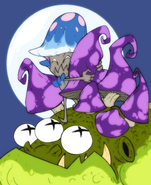 Toadstool as seen in a drawing from Art Stream # 72.

A drawing of Wigfrid, WX-78, and Wes fighting the Toadstool from Rhymes With Play.