“My nightmares have come true!”

“I will take you to POUND!”

“WHY WOULD NATURE MAKE THIS TERROR?”

“Selachii Felidae. A very large one!”

“Might be cute if it didn't want to eat me.”

“A spectacular chimera of fish and kitty.”

“I wish you were a tiger shrimp instead!”

“Come at me ye striped devil!”

The Tiger Shark is a pseudo-neutral Boss Mob found in the Shipwrecked DLC. It is a giant orange and black shark with stripes, as the name would suggest. It drops Raw Fish, Eye of the Tiger Shark, and Shark Gills when killed. It is only hostile to the player if the player is near the Sharkitten Den, or if it is attacked by the player. In Monsoon Season, it appears near the Den. It cannot be frozen with an Ice Staff and takes 4 Sleep Darts to be put to sleep.

The Tiger Shark will not drain Sanity, unlike most other boss mobs.

The Tiger Shark can spawn in any season, triggered by certain player actions while on the ocean (in a boat). These actions and their Season dependent chance to spawn Tiger Shark is summarized in the table below. When it spawns, unless it is near the den, it will be passive towards the player; this frequently results in it not being seen at all. Once reduced to 10% health, it will retreat towards the den. If it gets too far away, it despawns. After despawning, it cannot spawn again (either by actions or by approaching the Sharkitten Den during Monsoon season) for a certain amount of time. If it dies by any means, it cannot spawn again for 10 days, despite the current season.

Every now and then, the Tiger Shark will give some Bile-Covered Slop to its Sharkittens.

The Tiger Shark will not attack small creatures, the player or Packim Baggims if they stay away from its den. However, it will attack everything else like Wildbores, Spiders, Snakes, Sea hounds, etc. on sight. It might be a good idea to bait these to the Tiger Shark if the player is having troubles with them. If playing as Wendy, the Tiger Shark will also attack Abigail while ignoring Wendy unless she attacks it first.

When fighting on land, the Tiger Shark will run directly towards its targets and will try to bite them, which will deal area damage. It will also use a ground pound attack if its target is too far, that will also destroy structures. The impact place is easy to spot as it makes a huge shadow on the ground. This attack is also used when the Tiger Shark goes from water to land.

When fighting in the sea, it will keep the bite attack but will now have a dive attack similar to its ground pound, where it will jump into the sky and dive directly on its target. This attack makes a huge shadow when both jumping and landing it, making it very easy to spot. Tiger Shark's attacks will create lots of big waves which may make the fight for the player difficult due to the waves damaging the boat and getting the character wet. When at 10% health, it will retreat towards its den. If the player manages to corner it to the edge of an island on the way, the player could land a hit. However, the Tiger Shark will immediately attack back, damaging the boat.

The Tiger Shark can't hurt Sharkittens when attacking and is immune to Tooth Traps as the traps do not activate.

Characters with default damage multipliers could tank the Tiger Shark on land by using a high damage weapon, such as Cutlass Supreme, with a full durability Football Helmet and Log Suit or better armors. It can also be easily kited on land. The attacks can be dodged by moving away at the moment of Tiger Shark opening its mouth for an attack. After the bite animation is complete, the players can get 2-3 hits in before its next attack. If it happens to roar after biting, this is a good opportunity to hit it an additional 2-3 times, as it will not flinch when roaring. The belly flop attacks deal a lot of damage and should be dodged to increase the chance of survival.

Below is the number of hits it takes with each weapon to kill a Tiger Shark when playing with characters with a default damage modifier. The Weather Pain is not included due to the random nature of its projectile.

It takes 1 blast to freeze a Tiger Shark with an Ice Staff. It takes 4 Sleep Darts to put Tiger Shark to sleep.

Tiger Shark in the water during Hurricane Season. 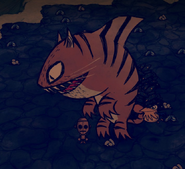 Tiger Shark as seen on land, with WX-78 for scale.

A Tiger Shark pursuing Wilson in the Ocean.

The Tiger Shark behind Woodlegs at sea during nighttime, as seen in the Shipwrecked trailer.

A Tiger Shark about to attack Webber.

A Tiger Shark in the sky about to protect its babies. 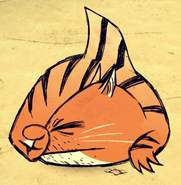 Tiger Shark chasing Wilson as seen in the announcement trailer for Shipwrecked.

The Tiger Shark as seen in the Eye of the Tiger Shark update teaser.
Español Русский
Community content is available under CC-BY-SA unless otherwise noted.
Advertisement