-5% of damage absorbed by force field

“A bit gaudy for my tastes, but it seems useful.”

“A solid field is being created out of the dark fuel. What a revelation!”

“Fit for the queen boss!”

“Transforms the wearer into the "King of Snoot".”

“Jewelry to emphasize my fantastic horns!”

The Thulecite Crown is head Armor that will absorb 90% of physical damage and has 1200 durability. When the wearer is struck, it has a 33% chance to create a force field. The force field lasts for 4 seconds, preventing all damage (except for Fire) and grants stun immunity. The trade-off is that 5% of the incoming damage is reduced from Sanity. The force field cannot occur more than once every 9 seconds. Unequipping the Crown will disable an active force field, even though the animation remains. The Crown's force field emits enough light to protect the player from Charlie.

Since Thulecite is not renewable in Don't Starve, only a limited number of Thulecite Crowns can be crafted.

In the Reign of Giants DLC, players have a small chance of finding Green Gems inside Tumbleweeds, thus making Thulecite Crown renewable, since more Thulecite can be gained with the use of Construction Amulets and Deconstruction Staves.

In Don't Starve Together, Thulecite is renewable by killing the Ancient Fuelweaver to reset the Ruins. Therefore, an unlimited amount of Thulecite Crowns can be crafted. 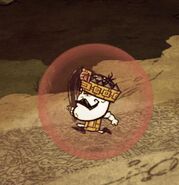 1 of 22
Retrieved from "https://dontstarve.fandom.com/wiki/Thulecite_Crown?oldid=449607"
Community content is available under CC-BY-SA unless otherwise noted.