Has no durability
(8 uses

“I could manipulate its temperature.”

“A fire would liven this thing up!”

“There it sits, just taking up space.”

“Its temperature is totally unremarkable.”

“We call those "night rocks" back home.”

“A pocketful of stone and temperature.”

“It's a rock. An interesting rock. But a rock.”

“This is a good rock. A special rock.”

“This isn't an ordinary rock.”

The Thermal Stone, also known as Heat Stone, is a Survival item in Don't Starve. It requires an Alchemy Engine to prototype, and costs 10 Stone, 1 Pickaxe, and 3 Flint to craft. Its purpose is to delay body temperature change, preventing the player from Freezing in the Winter as well as Overheating in Summer (RoG).

A Thermal Stone absorbs heat from a fire, regardless of whether it is on the ground, in a Chest, or in the player's inventory. The size of the fire affects the maximum charge the stone can attain. A Red Hot Thermal Stone can emit enough light to ward off Charlie.

A Thermal Stone acts as a heat source with an internal temperature between -20° and +90°. With the thermal stone in the inventory, the player's own body will attempt to reach a temperature given by the formula:

If the stone is on the ground instead, the target body temperature is instead given by:

which is simply the midpoint between the ambient temperature and the thermal stone's temperature.

The temperature of a heated thermal Stone drops at a rate determined by 120 insulation, which is 1 degree every 5 seconds. This insulation is only used for determining the stone's own temperature loss and does not affect the player.

The stage of the thermal stone is determined relative to the ambient temperature and each stage emits a fixed temperature:

While carried in any Backpack, including the Insulated Pack, Thermal Stones can still affect the player's temperature.

In the Reign of Giants DLC, Moleworms can steal Thermal Stones, so caution must be taken, especially around Deciduous Forest biomes. Thermal Stones no longer emit light.

In the Shipwrecked DLC, Thermal Stones are an ingredient for the Ice Maker 3000.

The Thermal Stone in Don't Starve Together has some differences from Singleplayer and its DLCs:

A Thermal Stone near a fire.

Thermal Stones heating up by a roaring fire. 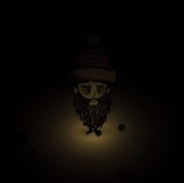 The Thermal Stone lighting the surrounding area in Don't Starve.

The 5 colors of the Thermal Stone.

Thermal Stone as seen in the poster for the Doorway to Adventure update.
Español
Community content is available under CC-BY-SA unless otherwise noted.
Advertisement