“Better to walk I think.”

“Each time I use it I die and am reborn.”

“This will help me get around quickly.”

“Quite similar to my Telebrella but it uses that fascinating dark fuel!”

“Even with all our legs, a little teleportation is nice.”

“A touch of magic not my own.”

When equipped in the hand slot, a prompt to "Telepoof" appears where the cursor is on the field, and right-clicking will almost immediately teleport the Character to that spot. The Lazy Explorer also increases movement speed by 25% while equipped, same as the Walking Cane. Telepoofing will not work on spots where the cursor is unavailable, such as the Ocean or in the dark. With each use, Characters will lose 15

and The Lazy Explorer will lose 5% of its Durability.

Since Orange Gems are not renewable, only a limited number of Lazy Explorers can be crafted.

In the Reign of Giants DLC, players also have a 0.02% chance of finding Orange Gems inside Tumbleweeds, thus making Lazy Explorers renewable.

In the Hamlet DLC, players also have a chance to find the Lazy Explorer in the hidden rooms behind Suspicious Cracks in Ancient Pig Ruins.

In Don't Starve Together, players get 1-2 Orange Gems from killing the Dragonfly. Players also have a 0.02% chance of finding Orange Gems inside Tumbleweeds, thus making The Lazy Explorer renewable. After killing The Ancient Fuelweaver player resets the ruins making Orange Gems renewable.

Wolfgang beside and holding The Lazy Explorer. 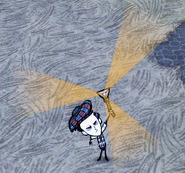 The Lazy Explorer before it was officially released. 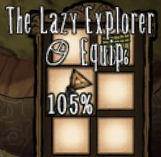 A bugged Lazy Explorer at 105% durability.
Retrieved from "https://dontstarve.fandom.com/wiki/The_Lazy_Explorer?oldid=449705"
Community content is available under CC-BY-SA unless otherwise noted.