The Gorge is an Event exclusive to Don't Starve Together, and the second of a planned series of such events. It follows the events of The Forge, the first event. The Gorge is a 3-person challenge involving cooking, farming, and gathering ingredients.

A beta of the event started on June 12, 2018, and ran until the official event went live on June 14, 2018. On July 6, 2018, The Gorge Tournament was announced which offered prizes including exclusive Portrait Frames and Profile Icons.[1] After the event ended on July 17, 2018, Klei Entertainment published several official statistics.

After barely escaping through the Molten Gateway, our survivors plummet headfirst into the ruins of a sickly city ruled by a ravenous beast. Work together to cook fine dishes and placate the Eternal Gnaw's hunger to avoid the curse of its terrible plague. Cook well enough, and you may even get to go home.

Game Mode Description:
Cook delicious dishes to appease the Eternal Gnaw in this Gate Realm.
* Enter the world through the Mossy Gateway.
* No nighttime.
* Use what you can find to cook offerings for the altar!

Players can join other players either via Quick Match, which drops them into the best server the matchmaker finds, or by manually browsing available servers. Alternatively, a player can request a custom server via Custom Match, allowing them to set the server's name, description, password and whether or not it is associated with a Steam Group. All Gorge matches take place on specially dedicated servers, and as such, players cannot host their own servers.

It is not necessary to have a full set of three players to start a match, though it is recommended to do so. A round will begin either when all three player slots are filled up, or when all players in an incomplete party vote to begin without the full three.

Characters have no Health, Hunger or Sanity, and only five inventory slots (four normal ones and a Hand slot). Characters spawn at the Mossy Gateway. The game is governed by the Gnaw's Hangry Meter, which depletes over time. The players have to snackrifice dishes on the Altar of Gnaw, which grant the players rewards in coins. Coins can be used to buy more cookware kits and other supplies. More valuable coins can get the players better supplies and more points. The following are the types of coins and their point value:

The amount and types of coins earned from a snackrifice varies depending on the following factors:

The first craving is always a Snack. After the first dish is snackrificed, the Gnaw will have a different craving to be fulfilled, as told by Mumsy. This goes on until the player party earns at least three Gnaw's Favors, which can be used to obtain the Ancient Key from Mumsy. To win the game, the player party must put the Ancient Key in the Altar of Gnaw before the meter fully runs out.

This lists the special abilities of all The Gorge characters.

The Gorge Tournament began on July 10, 2018, and ran until July 17, 2018. To enter, players had to play a regular match and earn the following four badges:

Earning other badges would not effect the entry. Getting these four badges granted the player a

Tournament Entry badge. Their score would be added to the leaderboard, which was viewable on the Gorge Recipe Book page under the Tournament section. Players could enter multiple times to improve their score.[2]

The prizes given out for each tier are the following: 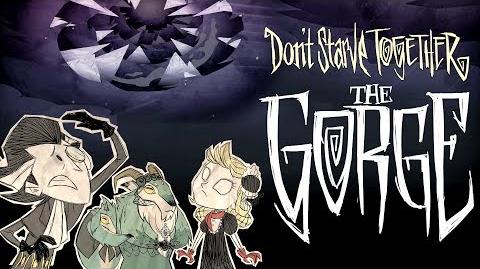 A promo for the Gorge in Rhymes with Play #184.

A promotional image for Rhymes with Play #187.

The game image for Don't Starve Together on Steam during the Gorge event.

An image for the Gorge event extension and tournament announcement, posted by Klei Entertainment on July 6, 2018.

A still of The Gorge announcement trailer. 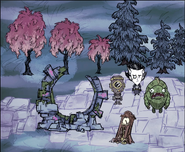 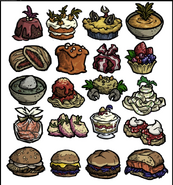 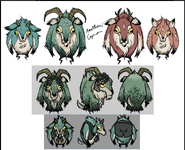 Retrieved from "https://dontstarve.fandom.com/wiki/The_Gorge?oldid=444406"
Community content is available under CC-BY-SA unless otherwise noted.