“THIS IS VICIOUSLY VISCOUS”

“It wobbles when you wave it.”

“Ugh. This is so revolting.”

“A ruthless weapon I should put to frequent use.”

“We could hit stuff with the pointy bits!”

“It's pretty flimsy. I can't see it doing much damage.”

“This would stick in my throat.”

“Aha! Now th'creepin' dread be in me own hands!”

“Can't beat a weapon with spiky things coming out of it.”

“A souvenir from the swamp creature.”

“Quite a nasty weapon.”

The Tentacle Spike does 51 damage per hit for players with the normal damage multiplier. It is a highly useful melee weapon for most instances, having the fourth highest damage of all weapons, being relatively easy to obtain, and having no drawbacks.

In the Shipwrecked DLC, the Quacken boss spawns a variant of tentacles. Quacken Tentacles have 5% chance to drop a Tentacle Spike when killed. 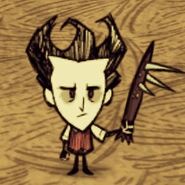 Some Tentacle Spikes dropped from a group of Tentacles.