Restores health and sanity, reduces wetness and raises body temperature, at the expense of hunger.

“I got all the badges in Girl Scouts.”

“It is time for a mighty nap.”

“Sleep is but a preview of death.”

“I CAN REBOOT IN THERE”

“Sleeping in there would give me a stiff neck.”

“I'm used to sleeping in worse.”

“That's a bit rustic for my taste.”

“Its restorative properties are quite intriguing.”

“Sleep this night, and prepare för battle ön the mörröw.”

“We should get some rest.”

“A cool, dry place to catch some Zzz's.”

“I prefers a water bed.”

“Nothing more therapeutic than sleeping in some spiderwebs.”

“Putting the tent together is the best part of camping.”

“I always sleep better in a tent.”

“I guess it wouldn't hurt to take a quick little nap...”

The Tent is a Survival structure that can be used to sleep through dusk and night, like an immobile Straw Roll or Fur Roll. It will restore 50 Sanity and 60 Health at the cost of 75 Hunger, and set the player's body temperature to maximum when used. It requires 6 Silk, 4 Twigs, 3 Rope to craft and an Alchemy Engine to prototype. The player is also immune to any damage except fire while using the tent.

Tents can be used six times before disappearing. If the player destroys one with a Hammer, the number of resources returned is inversely proportional to number of times the player's used the Tent (the more times the Tent is used, the fewer resources it will drop when demolished).

In the Reign of Giants and Shipwrecked DLCs, the behavior changes so that if the sleeper's temperature is below 35, then it will be set to 35. It may be more useful in Winter, where freezing is the prominent threat and dusk and night are much longer. Sleeping also reduces Wetness by 30.

In Don't Starve Together, sleeping in a Tent affects stats over time rather than instantly. Using a Tent restores 1

Three Tents made whilst playing as Wickerbottom. 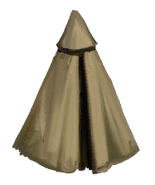 A Tent as it appears in The Screecher. 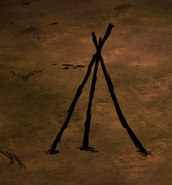 A burnt Tent from the Reign of Giants DLC.
Français
Community content is available under CC-BY-SA unless otherwise noted.
Advertisement