“It can show me the world.”

“I could escape if it were more powerful.”

“The gem appears to focus the nightmare fuel.”

“I wonder what this thing does.”

“Magic can do amazing things, when funneled through the right channels.”

“So it is possible to bend three dimensional space. I knew it!”

“I ride thröugh the air and the sea!”

“It makes my brain feel fuzzy.”

“It shows me things I never knew I could see.”

“I prefer a fast ship and th'wind at me back.”

“I like the teleporting. Could do without being struck by lightning, though.”

“So you're telling me this stick is "magic"?”

“But getting there is half the fun!”

The Telelocator Staff is used to teleport the player or Mob (including Bosses) to a random location on the map. When used on a mob, Lightning will strike the mob where it was standing before being teleported (possibly setting it on fire). When used on the player, lightning will strike them at the location used and also at the location they are teleported to (potentially causing fires both times). Each use will increase world's moisture, that when high enough can start Rain.

Using a Telelocator Staff in Caves will not teleport the target (even if a Telelocator Focus was built underground), but will cause Rocks and Gems to fall at the location where the spell was used (similar to an Earthquake). Note that falling Minerals can cause damage to players and mobs.

If the player built a Telelocator Focus in the world and stocked it with three Purple Gems, the Telelocator Staff will teleport its target to the point at which the focus is placed instead of to a random location. This consumes the gems.

The player can use the Telelocator Focus to teleport to a base after a long trip or quickly travel from one end of the world to another.

Note that since it is currently not possible to teleport to or within a cave, building one of these in a cave is just a waste of resources.

In the Reign of Giants DLC, when using the Staff on a mob, lightning may strike the player instead. WX-78 will always be hit, even when standing next to a Lightning Rod (causing both the character and the rod to be struck).

In the Shipwrecked DLC, Mobs in the ocean cannot be teleported.

In the Hamlet DLC, Pugalisk cannot be teleported.

The Telelocator Staff can be used to provide a quick escape for the player, to teleport enemies away from the player (including bosses like Deerclops), to commence Rain at will (particularly useful during Summer), or to activate WX-78's SYSTEM OVERLOAD perk on demand. When self-teleporting, this may leave the player lost, as the destination will be random unless a Telelocator Focus has been placed and charged, so using the staff this way may be risky. If the player teleports to a densely flammable area, the effects of the lightning can cause large amounts of damage.

WX-78 can activate their SYSTEM OVERLOAD by either casting the spell on themselves or by casting on any mob, regardless of whether a Telelocator Focus has been crafted or not. It is worth noting that the beneficial effects of multiple strikes will not stack, only the sanity loss will. If casting on oneself, however, a player is able to negate the effects of the second strike by equipping insulated clothing such as the Rain Coat or the Eyebrella (provided this is done fast enough). The Telelocator Staff can provide WX-78 with enormous benefit; it is always recommended, however, to have protection from the rain which will follow (unless used during Winter) and means of restoring lost sanity. 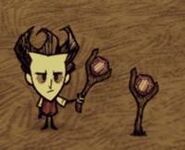 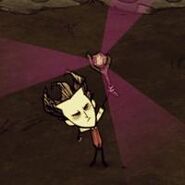