“It's covered with walrus hairs.”

“What feverish thoughts transpired beneath this?”

“Should auld acquaintance be forgot?”

“Reminds me of grandpa.”

“THERE NAUGHT BE MADNESS IN'T”

“All the rage with the sane people this season.”

The Tam o' Shanter is a Hat Item that is obtained by killing MacTusk. It restores 6.7 Sanity per minute while worn, which makes it the best sanity restoring hat item. The hat alone is enough to cancel out the sanity drop of heavy Rain or Dusk/Night, even when playing as Wolfgang.

It's a tier 2 warm clothing (120 insulation), which allows the character to delay freezing in Winter by a rate of 1 degree every 5 seconds. The hat lasts for 25 days, and a Sewing Kit repairs 20% of its durability.

In the Hamlet DLC, the Tam o' Shanter can be bought for 50 Oincs at The Sow's Ear Hat Shop in the Pig City. 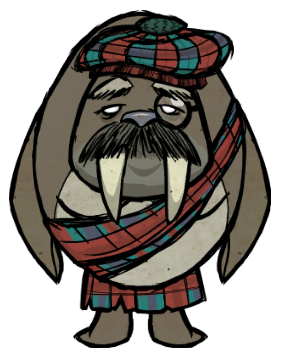 MacTusk with the Tam o' Shanter.

Webber with a Tam o' Shanter and Walking Cane.
Retrieved from "https://dontstarve.fandom.com/wiki/Tam_o%27_Shanter?oldid=468293"
Community content is available under CC-BY-SA unless otherwise noted.