“That egg could use some fire!”

“I WANT THAT HORRIBLE EGG”

“What a tremendous Magnus Avis egg!”

“I should steal its egg to teach it a lesson.”

“Oh wonderful! It contains an egg!”

“A feathered warriör lurks inside.”

“This could feed us for days!”

“Looks pretty cozy for a bunch of sticks.”

“A pretty egg in mother's nest.”

“She was protecting her nest...”

A Tallbird Nest  is a naturally occurring object that randomly spawns in Rockyland Biomes. Tallbirds will also spawn with nests (one Tallbird per nest) and will lay Tallbird Eggs there.

The Egg can be taken from the nest, which will anger the owning Tallbird and make it chase the player. The Tallbird will lay another one after 17.5 game hours, and if killed, the Tallbird will respawn in 2.5 days. The Egg can hatch into an adult Tallbird if it is unharvested and the parent Tallbird is dead.

At dusk, Tallbirds return to their nests to sleep, though they will wake up if anyone goes near them for a short duration or takes their Eggs.

In the Shipwrecked DLC, Tallbird Nests can be found rarely in the Magma Field Biome. 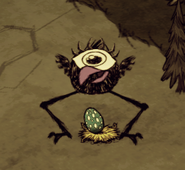 A Tallbird laying an egg.

A Tallbird sleeping with its egg at dusk.

Tallbird Nests as seen on the Map.

Farming various loot by planting a Spider Den by a Tallbird Nest. 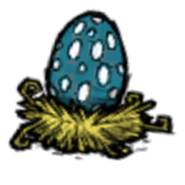 A Tallbird nest with an egg.

Retrieved from "https://dontstarve.fandom.com/wiki/Tallbird_Nest?oldid=468807"
Community content is available under CC-BY-SA unless otherwise noted.