“I guess you're in charge around here?”

“They're not so different from the pigs back at our place.”

“THIS LARGE SWINE COMMANDS THE SMALLER ONES”

“Every society's gotta have a leader, I guess.”

“My oh my, you look ill! Low of spirit, green 'round the gill”

“Something weird about that Pigfolk”

The Swamp Pig Elder is a Mob exclusive to The Gorge event in Don't Starve Together. He can be found in the swamp pig village area and appears to be the leader of the Swamp Pigs. 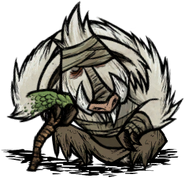 The Swamp Pig Elder as seen in a drawing from Art Stream # 25.

Concept art of the Swamp Pig Elder from Rhymes With Play # 201.

wake up
Add a photo to this gallery

Retrieved from "https://dontstarve.fandom.com/wiki/Swamp_Pig_Elder?oldid=489856"
Community content is available under CC-BY-SA unless otherwise noted.