“Something down there has bad breath.”

“Large fishie is underneath.”

“BUBBLES RISE FROM AN UNKNOWN SOURCE”

“Something big lies beneath.”

“I know you're down there, buddy.”

“You've given yourself away, pal.”

“The circumference and arrangement of those bubbles indicate that it's a whopper!”

“Which end are those coming from?”

Suspicious Bubbles are a feature found in the Shipwrecked DLC in the Medium or Deep Ocean Biome. They are similar in function to the Suspicious Dirt Pile of regular Don't Starve. They can be investigated which will reveal a trail leading to a Whale. 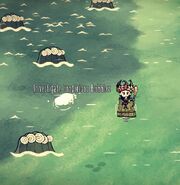 Wilson next to suspicious bubbles with an investigation prompt.

A Blue Whale at the end of the Suspicious Bubbles trail.
Community content is available under CC-BY-SA unless otherwise noted.
Advertisement