This is a page for a structure that's in the game. For the unimplemented object, see Sunk Boat.

“That mangy bird looks like he wants my stuff!”

“Another voyage comes to an end.”

“A marooned psittacine with a lugubrious look in his eye.”

“This fellow's not from these parts.”

“This bird's vessel is clearly not seaworthy.”

“What a curious parrot! I wonder if he'll speak with me.”

“He has sömething tö say!”

The Sunken Boat is a Structure that is generated next to the Ocean, and Flotsam can be found in the nearby water. A parrot named Wolly sits atop the boat, and the Flotsam can be snagged with a Fishing Rod to collect various resources and trinkets.

Wolly will accept a Trinket or any raw/cooked meat as a gift, and give a Crimson Feather as well as a random number of either Flint, Gold Nuggets, or Dark Petals. Wolly will not accept raw or cooked Monster Meat, but will accept Monster Jerky. When given an Old Boot, Sea Worther, Sextant, Soaked Candle or Toy Boat (all of which can be found in Flotsam), Wolly will tell a piece from one of Wolly's Riddles in addition to dropping loot. After trading, Wolly will fly away from the Sunken Boat and return after one game day. His return depends on the proximity of the player. If Wolly flew away and has not returned, spending a day or two a few screens away from the Sunken Boat will cause him to return. Wolly cannot be found during winter. He will leave the boat and return when spring/summer starts.

A Sunken Boat can be destroyed with four hits of a Hammer and will drop three Gold Nuggets, three Boards, a Blue Gem, a Red Gem, and a Sea Worther. Wolly will fly away from the boat if it is struck with a Hammer. Since the Sunken Boat does not respawn, destroying it removes the option to trade with Wolly and should only be done as a last resort if attempts to fish the Sea Worther from flotsam are unsuccessful (flotsam regenerates and there is a 1 in 23 chance for the Sea Worther to drop). 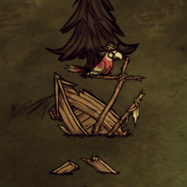 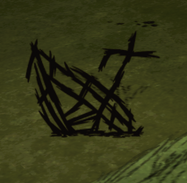 The Sunken Boat shown on the Map. 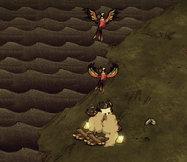 A bug where after giving Wolly an item and then hammering the Sunken Boat, a second Wolly will appear.
Tiếng Việt
Community content is available under CC-BY-SA unless otherwise noted.
Advertisement